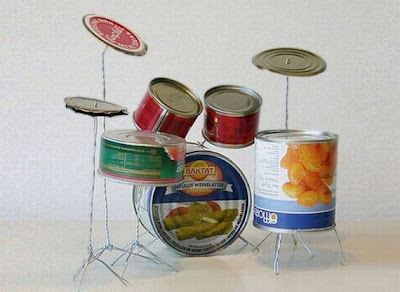 Busy times these days between changing diapers and going through mixes of my next upcoming quintet album (to be released on the Cellar Live label this fall). I'm also hoping to hook up with John Riley this week for a lesson while he's in town teaching at the Mount Royal University Summer Jazz Workshop and Tyler Hornby's drum set camp the following week. I'm also looking forward to hearing John play at the Beatniq next Friday with the faculty ensemble. John always has many thoughtful answers for my many questions. In the meantime, here's a few interesting things to check out around the blogosphere:

-Thanks to Todd Bishop over at his blog Cruiseship Drummer where he dug up this interview with West Coast drummer Dick Berk:

Dick isn't as well known as he should be, in my opinion, but he is really a GREAT drummer and I've admired his work with Cal Tjader, Ray Brown and Milt Jackson for some time. In particular here's an album that I enjoy and is a great example of Berk's swinging drumming:

Thank you Todd for this great find and keep up the great work!

-Speaking of interviews, Ted Panken has published a ton of old interviews over at his blog. Here's a great one with drummer Edward Blackwell:
https://tedpanken.wordpress.com/2011/07/21/edward-blackwell-wkcr-may-4-1986/

And another with Herlin Riley:
https://tedpanken.wordpress.com/2011/07/22/herlin-riley-new-orleans-drummer-1999-interview/

And finally a double interview with Idris Muhammed and George Coleman:
https://tedpanken.wordpress.com/2011/07/23/idris-muhammad-and-george-coleman-wkcr-april-5-1995/

-My friend and frequent guest blogger here at Four on The Floor Prof. Patrick Boyle forwarded this interesting video article on the future of advertising from marketing guru and blogger Seth Godin and is really worth taking a look:

-Halifax drummer and Jazz icon Jerry Granelli was recently featured on the CBC radio show Q last week. Check out this link for his interview and some really nice solo & duet playing:

And here's another CBC radio interview from a previous episode of Take '5':

-To get us all in a nice, inspired mood for the week ahead here's a masterpiece to admire. I hadn't heard this one in awhile but I'm glad I did. Here's Buddy Rich featured on the epic "Channel One Suite" that also features some great tenor playing from Don Menza:

Speaking of Don Menza, apparently he and trumpeter Sam Noto recently reunited for a gig at the Pilot Tavern in Toronto (with my good friend Bob McLaren on drums!)

Did anybody happen to check that hit out?
Does anybody know of any albums these two recorded together as a front line?

In the meantime, here's a video of Menza and Noto together from a date in New Orleans with Ralph Penland on drums and Cedar Walton on piano on "Cedar's Blues":

Now, I wasn't really familiar with drummer Ralph Penland either but thanks to the youtube.com gods here's some clips worth checking out as well:

-And finally here's another new blog that I've been checking out lately from my friend and frequent collaborator, saxophonist Jim Brenan:

Into the Stratosphere http://jimbrenan.blogspot.com/
Posted by Jon McCaslin at Monday, August 15, 2011