Happy Halloween everybody!
Posted by Jon McCaslin at Tuesday, October 31, 2017 No comments:


An oldie but a goldie....Find the full explanation here:

Posted by Jon McCaslin at Thursday, October 26, 2017 No comments: 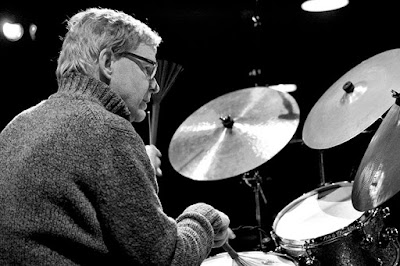 A rare, up close glimpse for you today of one of ECM's most definitive drummers, the great Jon Christensen:

A simple but sideways little exercise today that I've been messing with on the snare drum lately.

The paradiddle combination is an 18-note cycle (that switches hands back and forth, each time) and it moves around the beat in a somewhat unpredictable way so you really have to concentrate to keep your rhythmic balance centred.

I supposed you could also up the ante as well by orchestrating the accents of each paradiddle around the drums and changing the bass drum/hi-hat to a samba foot pattern (paging Mr. Dawson!)
Posted by Jon McCaslin at Thursday, October 19, 2017 No comments: 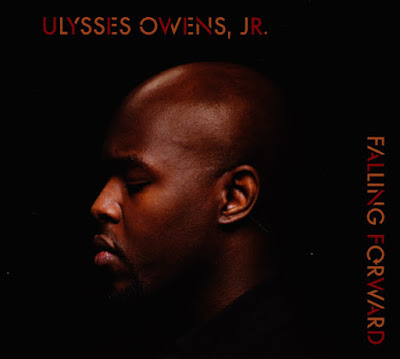 The Open Studio Network has also recently released an instructional series featuring Ulysses that will certainly be worth digging into: https://www.openstudionetwork.com/project/fyb-overview/

Owens was kind enough to take some time out of his busy schedule to answer a few questions about his recent album and other projects of late:

1) Tell us about your latest recording! How did you choose your repertoire and sidemen? What inspired you to pursue the vibe and instrumentation that you did? Was there a particular message you were trying to convey to the listener?

My latest recording is a trio record and I am really excited about it. I really feel for the first time that I have an album that really showcases who I am and where I am artistically in the moment. It’s a place of freedom. It features Reuben Rogers on bass and Joel Ross on Vibraphone. I really wanted to do a trio album because I feel that it’s the most natural context for me. The overall goal was to create an album of great music and display the awesome chemistry between all of us. There is so much music happening beyond the music.

2) Who are your influences, on and off the drums, and why?


3) What are you practicing these days?

I am always practicing, trying to play with better time and sit in the right place in the beat. I am always keeping my ears open and wanting to be incredibly tasteful and musical.


4) What other current and future projects do you have on the go at the moment?

- "Songs of Freedom Project" featuring the music of Nina Simone, Joni Mitchell and Abbey Lincoln, of which I am the music director.

- My company UOJ Productions is currently in the middle of producing several projects slated for release in 2018.

- I am also on faculty at the Juilliard School.


5) What advice do you have for younger, aspiring jazz drummers?

Really focus on the basic fundamentals. Really master your rudiments, play with great time and the metronome, limb development/balance and making the band sound good. You are the engine so as the engine functions so should you. Work on having a consistent groove that is so heavy and powerful that people sign up to play with you. Don’t worry about soloing and fills. Just focus on being a solid drummer. Lastly, practice patience and all good things will come to the faithful and those who are willing to work for it. 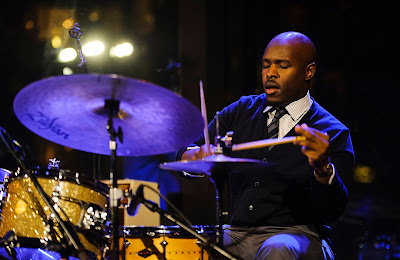 Art Blakey and the Jazz Warriors 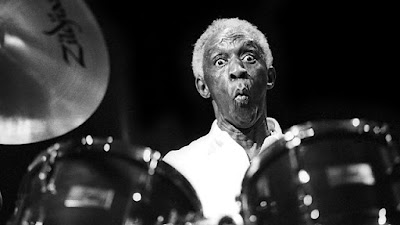 Since today would have been Art Blakey's 98th birthday I thought it
would be appropriate to post this documentary featuring Bu and the Jazz Messengers featured along with a troupe of British Jazz dancers, The Jazz Warriors:

Personally this documentary was an important resource for me during my teens, one of my first introductions to the music of Art Blakey and the Jazz Messengers, thanks to the diverse Jazz audio and visual collection at the Regina Public Library circa. 1994.


*Please check out my new Four on the Floor Instagram page:

I will be posting here every day (hopefully...) but only the videos will be linked and show up here, on my regular blog page.

Check back often for photos of my favourite Jazz drummers, short 1 min. instructional videos and various other "Easter eggs".

A brief demonstration of an exercise I like to practice that involves playing up beat accents, in the context of a 4/4 swing brush pattern:

Brush comping exercise (up beats).
A post shared by Four on the Floor (@fouronthefloorblog) on Oct 4, 2017 at 5:50am PDT


I usually stretch out each variation over the course of a two measure phrase but had to condense it to fit Instagram's one-minute time limit for videos (but I think it all still makes sense...) Hope you dig it!
Posted by Jon McCaslin at Wednesday, October 04, 2017 No comments:

A Tribute to Buddy Rich 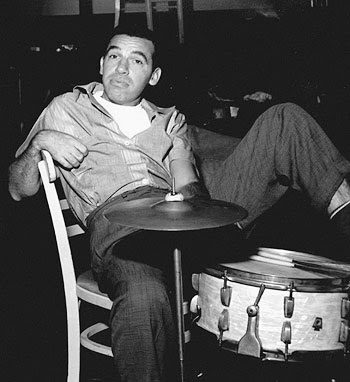 Thanks to the kind folks over at the Avedis Zildjian cymbal company, here's a three-part tribute to Buddy Rich (who's 100th birthday anniversary was celebrated this past week) with commentary from Armand Zildjian and Lennie DiMuzio:


And in case we needed a reminder of what a genius Rich was...