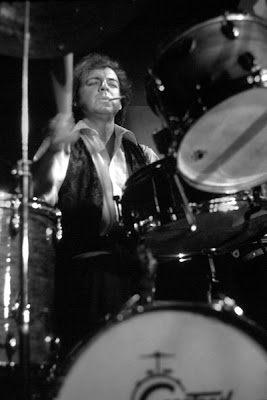 I came across a couple of great websites that feature the legendary and enigmatic Canadian jazz drummer, Claude Ranger.
Claude was originally from Montreal but spent time in Toronto and Vancouver as well before vanishing under mysterious circumstances in the late 90s. His style was modern and he took great pride in pushing the boundaries of his music and the musicians around him.

I never knew him or heard him play in person, but from what people who did know him have told me was that he was an adventurous spirit and lived his life the way he played his drums.

Check out some of the mp3's on this site that feature a young, fearless Kirk MacDonald on tenor saxophone.

Also, the CBC did an excellent radio documentary entitled "Stick & Stones" a few years ago on the life of Claude (produced by Carole Warren). You can find it here at the Australian BBC (!) website:

Claude, apparently, was a bit of a character. He always had a cigarette in his mouth when he played the drums and even had a method that allowed him to keep playing while he changed cigarettes and lit them up. He apparently was also known to completely stop in the middle of a tune/solo to open a fresh can of beer !

Regardless, Claude was a total badass when it came to jazz drumming.

My former teacher in Toronto, Bob McLaren was also a student of Claude's back in the 70s. Bob gave me some sheets of Claude's personal drumming exercises. When I find them (still unpacking here in Calgary even after almost 5 months!) I will scan and post them. Pretty unique exercises dealing with comping rhythms spread across the entire drum set in not-so-obvious ways. Interesting stuff. Thanks Claude : )

"The music business is a cruel and shallow money trench, a long plastic hallway where thieves and pimps run free, and good men die like dogs.

There's also a negative side."

Well....its been waaaaay too long since my last post (!) but I've been on the road lately in the UK (still am for another week) but I will be home soon so I expect more posts forthcoming once I'm back and have time to do this sort of thing (!)

In the meantime, I came across this clip on youtube featuring a friendly drum "battle" at Steve Maxwell's Manhattan Drum Shop featuring:

I also saw the Bad Plus last night at Ronnie Scott's in London so I will attempt a "review" later at some point. It was the first time I've seen this group and was throughly impressed. Dave King was playing some GREAT drums last night.