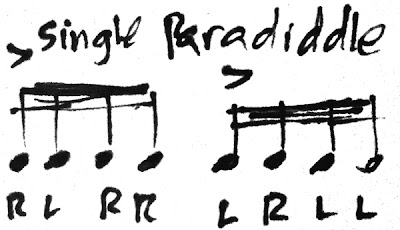 Well it's been awhile since I've had time to write a proper blog post. Things have been quite busy here over these past two months. Being a new father will do that to you but all is good ! Here's a few things on the go here at Four on the Floor:

- I had the pleasure of hearing the Jeff McGregor Quintet on Saturday evening at the Beatniq Jazz & Social Club in a band that featured Jeff on alto saxophone, Brent Mah on tenor saxophone, Steve Fletcher on piano, Kodi Hutchinson on bass and Calgary-turned-Montrealer Andrew Dyrda on drums. The band featured Jeff's original compositions that brought together a myriad of influences and you can learn more about him here from a previous edition of the "Calgary Scene".

Andrew's drumming was exceptionally musical and demonstrated a real maturity and development towards creating an original identity since I last heard him (Andrew was an occasional student of mine about six years ago before he moved away). Dyrda is certainly a young drummer you'll want to keep an eye on in the years to come as his dedication and hard work ethic is certainly paying off. You can learn more about Andrew in another upcoming edition of the "Calgary Scene".

Between a productive trip to Calgary's premier used record shop Recordland and a shopping spree on iTunes, I've been listening to a lot of great music lately. Here's some that have caught my attention and I've been enjoying lately:


- Check out this amazing Tony Williams drum clinic that has been making the rounds lately:


- This is not a terribly long clip but I enjoyed the brief up close footage here of drummer Adam Nussbaum:

You can really sense the incredible energy and deep sense of swing that he plays with even in this short one !


- Speaking of swing, this is the first footage of Thelonious Monk I ever saw when I was a teenager (from a 1950s CBS television program entitled "The Sound of Jazz" and if you haven't seen this in its entirety then check it out!):

Dig the ever swinging and tasteful drumming of Osie Johnson on that one (and an attentive Count Basie hanging out next to the piano as well!)


- Please come check out this exciting upcoming gig of mine this coming Thursday: 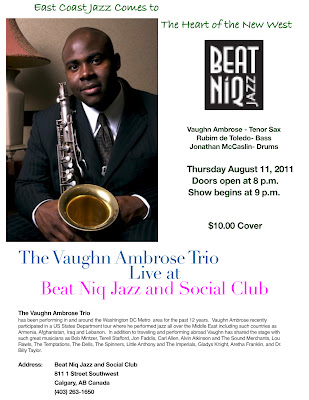