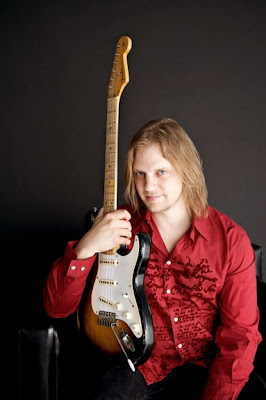 Today's Calgary Scene interview features one of Calgary's finest all round musicians, guitarist Ralf Buschmeyer. I've been very fortunate to have played with Ralf in a number of situations over the years and he always brings his A game to the bandstand along with a friendly attitude, a virtuosic ability on the guitar and a musical imagination that is matched by his professionalism and ability to cover a wide range of musical situations.

1) Can you tell us about your musical background? How did you learn to play Jazz?

My Dad is a big music fan. He had music on around the house a lot. I caught on to Blues and R&B when I was around 12, really listening. I liked Eric Clapton and Booker T & the MGs and had my first guitar at 13. Eventually, I found stuff like the 70's Jeff Beck fusion records, Spectrum by Billy Cobham and then Robben Ford. I asked a guitar teacher about how Robben was getting his sound, and he mentioned that Robben was influenced by jazz. Miles & Coltrane, notably. That led to finding guys like Mike Stern who then turned me on to Wes Montgomery and it wasn't too long before I was a full-time student studying with Lorne Lofsky.

Well, among the people mentioned in the last answer, I think I've been influenced by just about everything I've spent time learning. From intensive studies of jazz players, to songs I have found inspiring/curious/humorous/disrupting that perhaps I had to learn for a gig. It's all gone into informing me on how to play.

Robben Ford - for making the blues sound sophisticated while still honoring the tradition of a simple music form.

Mike Stern - for bridging a rock influence with legit bebop lines and phrasing as well as a great tone.

Lorne Lofsky - for regular, routine butt-kicking (as well as setting a high level of artistry). My college experience was great, a lot of that has to do with who you get as a private teacher, I believe. I don't think I could have asked for anyone better.

Wynton Kelly - made jazz sound natural and swinging. Wynton had a huge influence on my comping and sense of time.

John Coltrane - for ferociously attacking chord changes and not allowing jazz to be background music.


3) Name your top 5 favorite albums and how they have influenced you.

Slowhand (Eric Clapton) - Made me want to experience playing rather than just listening.

Talk To Your Daughter (Robben Ford) - Blues that was jazz informed. I needed to know how to get that sound.

Kind Of Blue (Miles Davis) - Confirmed jazz was, indeed, cool. I'd put it on every night before I went to bed in college and got the feel for swinging 8th notes in my head. Gateway to Wes, Coltrane, all other Miles, Bill Evans, and on and on....


5) What interesting projects do you have on the go at the moment? (gigs, recordings, etc.)


6) As a sideman you have played with a great variety of artists and genres over the years. Can you tell us about your experiences and some of the lessons you have learned from playing with these musicians?

Bob Day gave me an example of a guy who never stopped the learning process and never compromised his own playing.

Ingrid Jensen was fun, encouraging and demanded a high level of artistry.

Ralph Bowen set a ridiculously high bar of ability and creativity. Having to follow him on a solo was not an ideal place to be, at the same time it was a real test.

Jim Brenan is reaffirming that you can be from anywhere and be great.

I have learned from just about everyone I've ever played with. sometimes what to do, sometimes what not to do. But it's all practical knowledge. It's also worth mentioning that I've met or opened for several people that I really admire like John Scofield, Mike Stern and Wayne Krantz who were ALL very nice people. That was a lesson in itself.


7) Favorite place to eat in Calgary?

Spiro's. Had my wedding dinner there, great family, best pizza ever, I've never been disappointed. Try the 'Spartan warrior'!
Posted by Jon McCaslin at Friday, August 05, 2011