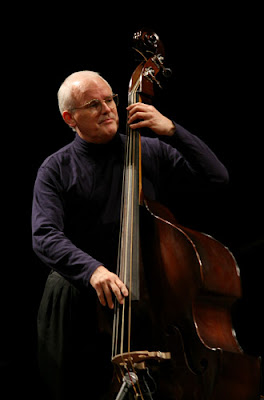 Another post today for my friends of the bass clef persuasion, here's a very moving piece and a tribute to bassist Dennis Irwin, a marvelous musician who left us way too early:

I had always admired Dennis' playing, having heard him on recordings with the likes of John Scofield, Joe Lovano, the Vanguard Jazz Orchestra and on a ton of dates on the Criss Cross label (how I found those particular albums is for another future post...) He always struck me as the ultimate sideman, someone that people loved to play with and who musicians obviously knew they could always depend on to play their music. If you saw his name on a gig or an album you always knew that he would get the job done with taste, musicality and professionalism. A great role model for any rhythm section player, I think.

I was fortunate to spend some time hanging out with Dennis and play with him in 2004 while I was spending time in New York City on a grant from the Canada Council for the Arts. I was studying with drummer Matt Wilson at the time and he introduced me to Dennis while I was following around Matt's band "Arts & Crafts" while they were touring the five boroughs, performing school concerts as part of the Jazz at Lincoln Center outreach program.

Dennis was a very warm person and graciously invited me to his loft for a couple days to play together and talk about music. We also had a mutual friend in Montreal bassist Brian Hurley (whom I had played with extensively) so we got along pretty quickly. Dennis and I played a lot of quarter notes together (among other things!) and I learned a lot from his tales of playing with all the world's greatest Jazz drummers (Art Blakey, Bill Stewart, John Riley, Idris Muhammad, Kenny Washington, Mel Lewis, Lewis Nash - you name it!) Dennis and I was also shared a few laughs following his gigs on Monday evenings with the Village Vanguard Jazz Orchestra and he graciously invited me to sit in with Pete Malaverni's trio at the Sweet Basil one night (and let me tell you, it was very hard to play following the swinging' drumming of Leroy Williams!) It was a great lesson and experience that I will remember for the rest of my life.

And finally a performance of Matt Wilsons "Arts & Crafts" band featuring Dennis on the Monk tune "We See":