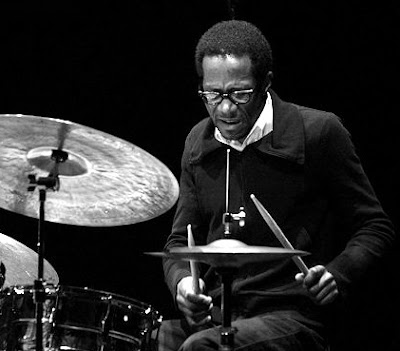 Here's a nice one to finish the week off, a couple of fine sets featuring Brian Blade and his Fellowship band from a recent show at Yoshi's in San Fransisco:

The chemistry that this band plays with is really something else. If I'm not mistaken, Blade has basically kept the personnel of this band together since the late 90s. That's impressive! One might imagine that a record company or a club owner or whom ever might be inclined to have Blade put together an all-star band of sorts. But I really respect the fact that Brian continues to develop his music with his crew despite the fact that they might not all be as high profile names as some of the other artists that Blade often accompanies as a sideman. I really respect that. The music always comes first with this guy and he and his band are musically in it for the long haul. These guys can all really play.

In the July 2008 issue of Modern Drummer, Ken Micallef asked Blade about this and his choice of musicians for his band. He replied: "It's hard for me to see it any other way. We're friends, we've known each other for so long. But when I write, these are the people that I hear. I hear their voices. I want my emotions and my heart to be wrapped up in that, otherwise I can't take stock. I want Fellowship to develop over as long period of time as possible."

I actually remember listening to his first album as a leader at a listening booth at the HMV on the corner of Peel and St. Catherines in Montreal shortly after it was first released in the late 90s. Brian had begun to gain some recognition for his work with Joshua Redman's band and with Kenny Garrett (as well as with Joni Mitchell and work with Daniel Lanois). He was definitely known for his intense energy and style of aggressive drumming (incidentally, I distinctly remember hearing a killer bootleg tape from the Montreal Jazz Festival featuring Brian with Kenny Garrett and Pat Metheny, playing on a program of John Coltrane's music, that bassist Sage Reynolds had given me. That shoddy tape recording really changed my perspective on things!) Anyways, for a "drummer's" record Blade's approach with the Fellowship really shattered any preconceptions I may have had at the time as to what a drummer-led band was all about. It's not really all about featuring the drums in every tune, building compositions around drum solos or crazy, mathematical odd meter vamps...instead this band is about a dedicated group dynamic and strong, through-composed textural and mood-based compositions that take a group effort in order to fully develop properly. What really knocks me out is their attention to space, pacing and dynamics that only the most mature of musicians with an open set of ears can tackle with such grace, flow and musicality.

Lately I've been revisiting the self-titled Fellowship album (1999) and the the follow-up "Perceptual" (2000) recently. The more recent Fellowship recording "Season of Changes" (2008) is on my to-do list as are his collaborations with guitarist Wolfgang Muthspiel ("Friendly Travellers") and several trio recordings he recorded with pianist Edward Simon and bassist John Patitucci.

With regards to Brian Blade's unique style of drumming: I'm paraphrasing here but I read somewhere awhile ago in regards to a lesson that Ed Soph gave to a rather high-profile and accomplished drummer who was fascinated with Brian Blade's drumming but could not figure out how to capture that same spirit, energy and dynamic in his own playing. Ed replied (and I'm paraphrasing here of course!) something to the degree of:

"Well you have to understand that when Brian comes to play he is like a big empty vessel just waiting to be filled up by the music that surrounds him. You, on the other hand, when you come to play your "vessel" is already filled up and ready to be emptied!"

This all makes perfect sense and sums it up nicely as I sit here writing this and listen to the album "New Directions in Music: Live at Massey Hall" that features Brian Blade with Roy Hargrove, Michael Brecker, Herbie Hancock and John Patitucci. His sense of dynamic flow is impeccable.

The guy is all ears, all the time!

I just have to wonder out loud here: what does Brian Blade practice on the drums when he's at home these days? Rudiments? Wilcoxon? Syncopation exercises? Ride Cymbal technique? Playing along with recordings? Levon Helm backbeat grooves? Of course I'm being a bit tongue-in-cheek-here, but I am genuinely curious. For what it's worth...I know from a personal experience (crashing on his piano players couch once!) that Brian spends a lot of time playing the guitar...but that story is for another blog post, another time.

If you go back and listen to his earlier recordings from the early to mid 90s I hear a strong influence of Elvin and Tony in his playing but with a distinctive New Orleans looseness (incidentally Brian was a student of Johnny Vidacovich at one point). However, as he's developed over the years he really plays with such an open phrasing that it's almost like you can't define what he does in terms of licks or patterns...there is a certain "organic" quality about his drumming and phrasing that somehow defies strict definition from a "drumistic" standpoint (take a good look at his now infamous solo from Joshua Redman's "Jazz Crimes" to see what I mean...)

Wayne Shorter offers some interesting perspective on this from that same Modern Drummer article I mentioned above: "Brian places importance on the kind of storytelling that takes you away from the technique of the drums. Brian is like Sonship Theus and Eric Gravatt, these kinds of drummers who aren't stuck in method books...Brian is like a painter. He is youthful. Every day is the first moment. He doesn't sound like he's working on something today that he was doing two months ago."

Hard to argue with that! Lessons to be learned, indeed...

Here's another favorite of mine that features Brian Blade with Kenny Barron and Kiyoshi Kitagawa:

btw-Andrew Hare recently commented on Brian Blade's drumming as well over at his blog The Melodic Drummer. Check it out. 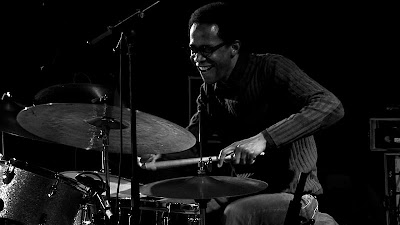