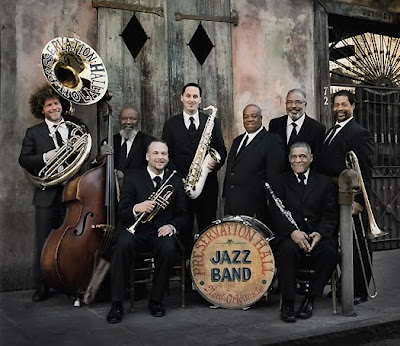 On Monday night I had the opportunity to hear the Preservation Hall Jazz Band from New Orleans perform at the Epcor Centre for the Performing Arts in Calgary, AB. It was an impressive and joyful evening of traditional New Orleans Jazz music that brought to mind the legacies of Louis Armstrong, King Oliver and other early Jazz music from the Crescent City.

The band featured the following superb musicians (no sousaphone that night though! oh well...)

It was a great evening all around and featured early American Jazz music played with the authentic sound and feel. You can tell that these musicians have grown up with this music and they play it with a sincerity and real knowledge, appreciation and deep amount of respect for the tradition.

Two real things really stood out for me after hearing them play. I was reminded that:

1) Jazz is fundamentally a folk music...

2) The happy and joyful spirit that these guys play with was a nice reminder that it's okay to have fun while playing Jazz music. Personally, maybe I need to try and smile a bit more myself when I play (*see Billy Higgins!)

For me, the highlight was easily the trumpet playing of Mark Braud. His playing was outstanding and he really nailed it as far as I was concerned.

"Little" Joe Lastie's drumming provided the perfect buoyant support for the band. It was firmly rooted in the style of such early Jazz drummer pioneers such as Warren "Baby" Dodds and Zutty Singleton. I was very impressed and got a real lesson in Second Line drumming and early Jazz drumming styles that rely heavily on using buzz/press roll vocabulary, playing time on the snare drum (or as Baby Dodds referred to it as "digging coal" on his LP "Talking & Drum Solos". Carl Allen gave me a copy of this years ago and it is a must have resource for anyone interested in early forms of Jazz drumming.)

Here's a taste of what the Preservation Hall Jazz band is up to these days: