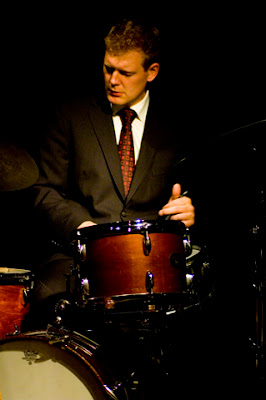 Today's post features an interview with my fellow Canadian Jazz drummer and blogger Jesse Cahill. Jesse is currently doing great things out in Vancouver, teaching at Vancouver Island University and is touring at the moment with a Hank Mobley tribute project featuring Cory Weeds on tenor saxophone, Oliver Gannon on guitar and NYC organist Mike LeDonne. I'm really looking forward to their show at the Beatniq on Saturday evening and I thought it would be nice to ask Jesse a few questions in advance of their performance.

I've known Jesse since 1995 when I first started my undergraduate degree at McGill University in Montreal. Jesse and I split the drum chair in one of the big bands for a couple of years and also shared a practice space for awhile. Even back then Jesse was an absolute monster on the drums and I always really admired his tremendous sense of swing and understanding of the tradition of Jazz drumming (he has checked out ALOT of recordings over the years). And of course Jesse's brush technique was always something to behold.

Jesse was nice enough to take a few moments out of his busy schedule to answer a few questions here at Four on The Floor:


1) Can you tell us about your musical background? How did you learn to play Jazz?

Both of my parents played music when I was a kid so there was always something on the record player or banjos and guitars being played. Mostly growing up I listened to R&B and rock n roll: Chuck Berry, early Stones, the Coasters, Paul Butterfield and blue grass too as that's what my dad played. I got a snare drum when I was 12 and borrowed a drum set from my high school the following year. I found jazz music almost right away mostly from listening to the CBC and going to see concerts in Victoria. My Aunt took me to see Wynton's Majesty of the Blues tour and that was pretty much it.

I learned (and am still learning!) to play jazz by listening to records and trying to copy what I heard. It sounds cliche but that's really what I did. I met a few older musicians and they told me that's what they did so I just started going to the public library and taking out as many records as I could: MJQ, Miles Davis, Cannonball, Bud Powell, Larry Young, Dexter Gordon etc. At some point I got it in my head that I was good enough to go to the local jam session. I probably sucked but I got to sit in for a tune or two every week. A few guys I took lessons with in town let me come down to there gigs and sit in after I bugged them enough. I must have been a total pain in the ass!

When I was 18 I got to take some lessons with Keith Copeland and that really changed everything. He showed me how to practice jazz drums and gave me a great list of recordings to check out. That was huge! Then I went to Montreal to go to McGill and that's a whole other story. I loved it in Montreal and had many great teachers and friends to make music with.

Like most musicians I probably have more influences than I can actually list but I love jazz music! Soul music too. Music is a visceral thing for me so I've always been drawn to the greasier side of things. I love the sound of the Jazz Messengers, especially the live records, that energy is very inspiring. Or a musician like Bud Powell who put so much of himself into every note. I'm a huge fan of southern soul, anything on Stax records. That Memphis sound is amazing.


3) Who are some of your favorite drummers and why?


4) Name your top 5 favorite albums (or more!) and how they have influenced you:

Again this changes all the time, there's so many great records and I've been influenced by a lot of different things so in no particular order here's five of my favourite records:

Art Blakey Quintet: "A Night at Birdland" - These sides, to me, are the essence of jazz music. It's swinging, has endless energy and the band plays with reckless abandon from start to finish.

Barry Harris: "At the Jazz Workshop" - Cookin! This is as close to perfect as I think it could get.

John Coltrane: "Live at the Village Vangaurd" - I love Elvin's brush playing on Softly and would say that Spiritual has been a blue print for me for playing in 3/4.

Larry Young: "Unity" (and all of the other Blue Note dates he did with Elvin) - This was the first organ record I ever owned.

Dexter Gordon: "Go" - The first Higgins record I ever heard. This was how I always wanted to play. I'm still trying….

Lately I've been spending a lot of time on trying to be a better ensemble player, do a better job playing arrangements and what not. I spend a fair bit of time every day playing snare drum, playing rudiments and such, playing some brushes, playing some time with the metronome and playing along to a recording or two. I like to work on tempos, in particular the ones I don't get to play very much (warp speed and slow ballads are the worst if you aren't doing it all the time). I also like to learn new feels. Lately I've been trying to get a good boogaloo together.


5) What interesting projects do you have on the go at the moment? (gigs, recordings, etc.)

I'm on the road with The Cory Weeds/Mike LeDonne quartet at the moment. I have my organ band in it's two forms, big band and quintet. I'm playing with Harold Mabern and Eric Alexander in a few weeks and Cory Weeds' Quartet CD launch. So I guess right now it's mostly spang-shang-a-lang just the way I like.


6) How has writing your blog changed your approach to teaching and or/playing the drums?

It's forced me to put my own shit under the microscope a lot more than I have in the past (I've watched way more video of myself than ever before). And then of course there's trying to write in complete sentences.

My favourite place to eat at home is in my house! On the road I just try to keep a good 3 to 1 healthy to greasy meal ratio.
Posted by Jon McCaslin at Monday, October 24, 2011