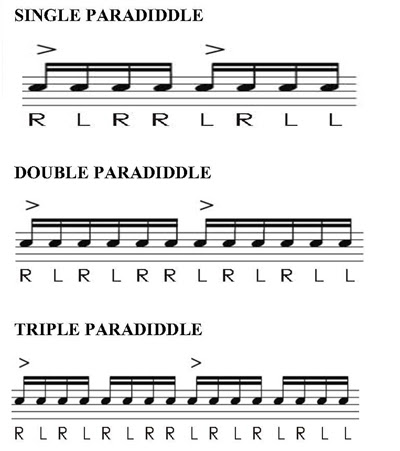 I know we are well beyond both Canadian and American Thanksgiving's, but the words Thank You are important ones. The world would be a better place if we all used those words more often. I'd like to take this opportunity to thank a few people in today's post:

-I'd like to thank everyone who came out to my drum clinic at Long & McQuade in Calgary last week and I appreciated all the enthusiastic questions and interest in what I do. I focused my workshop on brush playing but this time, instead of demonstrating different specific patterns, I decided to focus on the importance of developing different types of strokes and fundamental sounds/movements we can get with the brushes. I also played several rudimental snare drum exercises and applied different brush stroke techniques to those routines as well. As I stressed in my clinic: Brush technique = patterns + concept/execution of sound. Thanks to Tyler Pickering over at L&M who's been putting together this series of drum clinics featuring local Calgary drummers.

-Thanks to Ted Warren over at his great blog Trap'd where he recently interviewed me for his new "Inside the Drummer's Studio" feature.

-Also special thanks to Peter Hum over at Jazzblog.ca where he featured myself, Ted and West Coast Jazz drummer/blogger Jesse Cahill in his feature "Canadian Drummers with Blogging Chops" (btw - including Peter, the four of us represent three generations of McGill graduates!)

-Thanks to saxophonist Jeff Coffin who stole the show at the Bela Fleck & The Flecktone's Christmas concert last Tuesday in Calgary. This is the first time I've heard this great band and they didn't disappoint at all. The entire show was amazing and the Tuvan throat singers from Siberia were really something special.

Here's a few clips of Jeff Coffin, an amazing musician that I'd like to hear more of (and play with!) in the future:

Jeff, by all accounts, gave an amazing masterclass at the University of Toronto a few years ago while I was studying there (unfortunately I had a gig or something that afternoon and missed it...) Jeff was in town playing at the Rex that week with guitarist Michael Occhipinti and I heard him interviewed on Joe Sealy's radio program on Jazz.fm. Jeff played a solo saxophone version of Body & Soul that, to this day, is one of the most brilliant musical things I've ever heard. Ever. I was driving my car at the time and even pulled over to the side of the road so I could pay attention properly and not get into an accident while listening. Yes - driving in Toronto...

-Thank you to Stuart McLean of CBC's Vinyl Cafe. My wife and I took in his concert on Friday evening and musical guests Matt Anderson and Jackie Richardson were outstanding. Stuart is an amazing storyteller and I wish I could play drum solos the way he tells stories...

-Hey, attention all Calgary Christmas Jazz fans. Be sure to check out saxophonist P.J. Perry with pianist Bill Mays, bassist Neil Swainson and drummer Terry Clarke next Saturday evening. Local Jazz enthusiast Henry Beaumont has gone out of his way to promote and produce this show featuring Canada's finest. Support live Jazz in Calgary this holiday season. Don't be a Jazz grinch. Otherwise our holiday coordinator here at Four on The Floor will send you a big fat piece of coal... 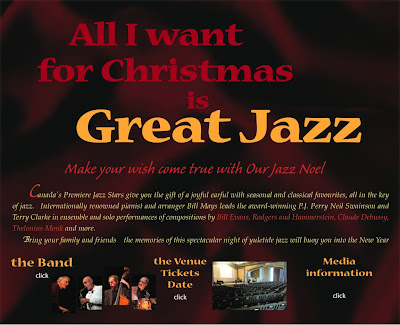 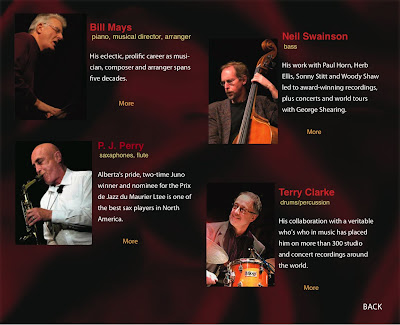 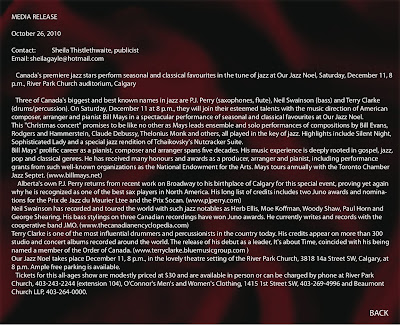 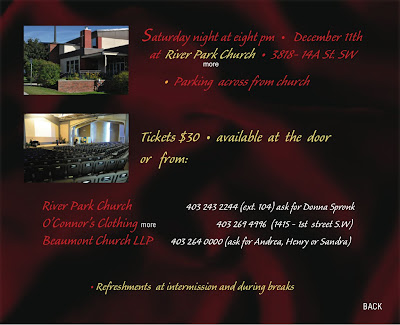