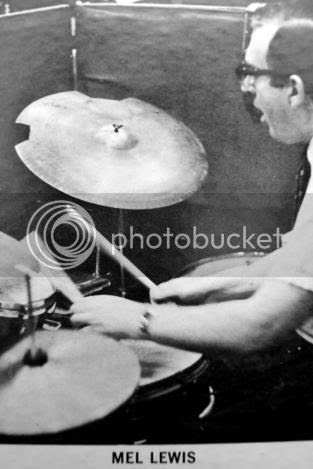 Wow...let's hope that Zildjian tries to copy this one:

Here's a clip of Mel Lewis playing this exact cymbal on the Dinah Shore Show with Ben Webster and Gerry Mulligan:

I searched for some more information regarding this cymbal on the internet and came up with this interesting story and information via someone's post at cymbalholics.com. Apparently drummer Danny Gottlieb owned this fine cymbal of Mel's and had this to say about it:

"This is a cymbal that Mel told me about when I first met him in 69-70. He said it was his favorite cymbal of all time, and that he only (at that point) used it for special projects, as it was cracking...It's a 20 inch 50's A, with TWO chunks of metal cut out... from the left top and right top of the cymbal. The cuts are about 1 inch deep, and maybe 2 inches long, about 6 inches apart and were done to stop cracking. Mel said that the cymbal was ok before, but so much better with the cuts. I guess the "stress" points were taken out and it has an unbelievable low tone when you hit it on the side. There are two rivits, next to each other (copper), on the right side. And it is cracking again, under one of the cuts. I get nervous to carry it, let alone play it.

When you first hit the cymbal, it sounds really weird-dark, trashy, a little on the dead side, and it takes a minute to get used to it. But, when you play it for a while it (at least for me) becomes hypnotic, and it just has some magical high stick sound, and low growl sound with no middle range. It just seems to blend really well with acoustic instruments.

I have played it with my heavy, weird, nylon tip Hot Sticks, but it seems to sound the best with thin, wood tip sticks (Mel's model). I think Mel used this on all of the Terry Gibbs big band recordings, on Maynard Ferguson's The Blues Roar", Art Pepper plus 11, and some Thad and Mel recordings. The one DVD I know about where you can actually see Mel play the cymbal, is on a DCI drum solo collection, where Mel plays with Shorty Rogers. I have also seen it in pictures. There is a classic shot with Gene Krupa and Lionel Hampton from a TV show with Gerry Mulligan (maybe even Buddy Rich) and you can see Mel in the house band in the back and the outline of the cymbal with the cuts.

I purchased it, along with some other cymbals, from Doris, shortly after Mel passed away. As I remembered him taking about that specific cymbal, I wanted it as he had mentioned it specifically to me, and I knew it was special to him. The only other cymbal in the bag with this one, was a 16 inch (I think 50's) K, and I have that one as well. It sounds like it was also used on Art Pepper plus 11, but I can't be sure.

I know Mel mentions it in his cover story with Rick Mattingly for Modern Drummer, and I think he says Buddy called this cymbal "one of the greatest in the world". Of course it was Mel's touch that made it sound so great. I took it to Zildjian a few years ago, to see if they could duplicate it, and I left it there for a few months. Joe (assistant to Paul Francis) took it on as a project and made some prototypes.The cymbals he made were not really close to the sound of the Mel cymbal, but they are great in their own way. I think he took Peter Erskine's 20 left side ride, thinned it down, and lathed it. He made some beautiful, thin, washy dark rides...but nothing like Mel's."
Posted by Jon McCaslin at Wednesday, December 08, 2010