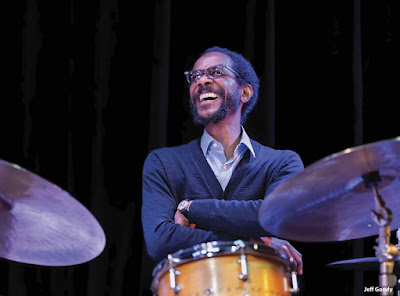 Last April 2022 Brian Blade performed at Koerner Hall in Toronto with Joshua Redman's Mood Swings band featuring Gerald Clayton on piano (filling in for Brad Mehldau) and Christian McBride on bass. Former Toronto and now St. John's, Newfoundland resident and drummer Mark Micklethwaite was in attendance and offered a very thoughtful and articulate post-concert summary via Facebook. He was also kind enough to allow me to share his thoughts here below.

Brian can play at every volume, from a whisper to a roar. In a resonant concert hall, drums can take over really easily. Even when he bashes, it doesn't sound too loud. This is not easy to do.

As per above, you can have great intensity without bashing. Brian's intensity is beyond compare.

3. Explore Every Sound.
He used sticks, brushes, mallets with sticks on the other end, and some kind of soft plastic brush thing as implements, moving back and forth as needed. He kept his bass drum case to the right of his floor tom and would often toss what he was done with and grab something else. He also had a tambourine (didn't play it) and a few handfuls of bells and jingles that he used during his own rubato / free piece.
He also had a couple of thin towels that he used on the snare (snares on and off) and floor tom, with varying degrees of muffling. He'd put them on and take them off in the same song, as needed. Sometimes he'd move it to his leg for a while and then put if back on later.

4. Cymbals.
He gets a million sounds from every one. Every cymbal can be a crash, a ride, a gong, a triangle and a shimmer. All sounds are available if you want them.

His touch is unparalleled. He can bash a cymbal and hold the stick against it so it doesn't fully resonate, so you get the crash but not an endless wash.

5. Feathering the Bass Drum.
This was a revelation for me, having seen him many times but never his right foot for the entire concert. Some say feathering is 'old school' but he played the bass drum on quarter notes almost constantly throughout the night. Felt but not heard. Beater hitting the head ever so lightly and muffling so briefly. In a loud room, bass drum control is uber important.

6. Know the Music.
Everyone else had sheet music (Gerald got it two days before...) but Brian had everything memorized. And he knew the songs and forms and hits / shots and caught every nuance when needed.

7. Communication.
Brian was looking at all the members of the band, giving smiles and visual cues. This was especially evident with Gerald. Since it was his first gig ever with the band, Brian seemed to pay extra attention to him, especially the first few tunes. He was smiling and nodding, letting Gerald know that he was welcome in the band and nailing the music. Which he was, in a big way.

Joshua has always been very active as a listener onstage, even when he's standing side stage not playing. He's listening, tapping his foot, reacting to the music, encouraging. Brian cued the end of one drum solo VERY LATE and the only reason Josh caught it was because he was listening and watching and jumped in at the last second with the head out.

8. Process not Perfection.
This aspect was huge for me, and I'm not sure I can put it into words, but I'm going to try:

From the full view of his every move, I was amazed at how many times he "missed"; how he'd go for a fill up the toms (or down) and miss the crash at the end or flub somehow. And after a brief pause (or not) he'd just keep going. It was as if the trying and missing was part of the point; going beyond what you know, pushing ahead beyond what you can already play. And even when he'd miss, you'd be right there with him, because the intensity and the intent is all right there. One time near the end he almost fell off the stool going for something and I just about leapt out of my seat to try and catch him. Such intensity. So in the moment.

9. Joy.
People talk about this all the time, but it's true; he translates joy in every way. His body language, the smile on his face, the reverence for the music. It's captivating. Inspiring. Everything.

10. On the drum rider, always request a comfortable seat!
Mark Micklethwaite is an accomplished musician, educator, historian, and administrator. His work experience in the music field includes positions at the Banff Centre, Greenleaf Music, JAZZ.FM91, and Manhattan School of Music. He has facilitated events at various venues including Glenn Gould Studio, Carnegie Hall, Lincoln Center, and Blue Note Tokyo, working with such artists as Dave Douglas, Vijay Iyer, Sheila Jordan, Lee Konitz, Joe Lovano, Pat Metheny, and Oscar Peterson.
As an educator, Mark has developed innovative community and educational programming for students of all ages and facilitated relationships with schools and community groups to present many engaging programs. He has taught classes, workshops, and ensembles in various settings including the Halton, Peel, Durham, and Toronto school boards, Queens College, University of Toronto, York University, and University of Waterloo. Mark helped develop the jazz appreciation curriculum at JAZZ.FM91 and taught 6-week interactive courses to over 300 students.

A successful freelance drummer for over twenty years, Mark has performed at clubs, concert halls, and festivals throughout North America, Europe, and the Middle East. He has performed with musicians such as Guido Basso, Phil Dwyer, Joel Frahm, Dave Frishberg, Molly Johnson, Christian McBride, Donny McCaslin, Mike Murley, Ted Quinlan, Kevin Turcotte, the Turtle Island String Quartet and Kenny Wheeler. He completed his Bachelor of Fine Arts in Music at York University and his Masters of Music at the Manhattan School of Music in New York City.
His work experience in the music field includes key positions at the Manhattan School of Music , Greenleaf Music, York University, JAZZ.FM91, and the Banff Centre. He is currently on staff at Memorial University in St. John’s, NL where he coordinates venues and concerts and also teaches in the School of Music.
Check out Mark perform with Montreal pianist and composer Marianne Trudel on January 26th as part of the Newfound Music Festival at Memorial University January 26-27
https://mun.ca/music/events/concert-series/
-------------------------------------------
And while we are on the topic of Brian Blade, check out this recent interview with Norah Jones on her Playing Along podcast:
And finally here's another favourite that I've shared before, Brian Blade featured on Daniel Lanois' Burning Spear:
Posted by Jon McCaslin at Monday, January 16, 2023