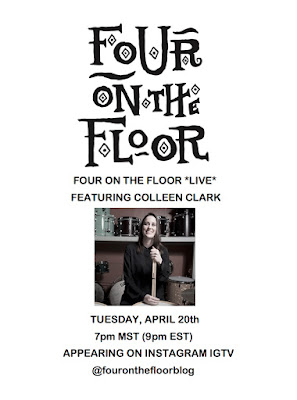 Please join me for the next episode of Four on the Floor *Live* happening next Tuesday, April 20th at 7pm MST (9pm EST), appearing on Instagram Live IGTV @fouronthfloorblog featuring Dr. Colleen Clark! 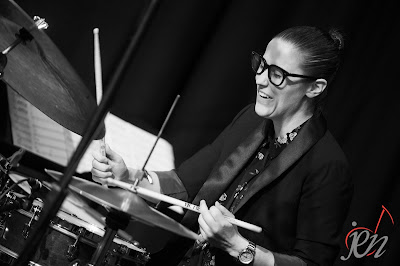 Drummer, composer, educator and bandleader, Dr. Colleen Clark is the only drummer and woman to earn a Doctor of Musical Arts degree in Jazz Performance at the world-renowned University of North Texas, the oldest jazz institution in America. As a member of the Associate Graduate Faculty at the University of North Texas, Clark currently oversees the research interests of doctoral students in jazz studies.

As a player, Clark has been described as "someone to watch" and "someone who will be turning heads in jazz for years to come." Clark was invited by the ASCAP Foundation to lead her band, the Colleen Clark Collective, at the Kennedy Center. Dr. Clark has performed in prominent NYC venues including Jazz at Lincoln Center, Birdland and the 55 Bar. Her debut album, consisting entirely of her original music, Introducing Colleen Clark, was produced by Gordon Stout and engineered by ten-time Grammy Award nominee/winner, Brian Dozoretz. Clark proudly joined the Sisters in Jazz Collegiate Combo on their premiere performance at the Jazz Education Network Conference in 2019.

Dr. Clark currently teaches at City University of New York's Borough Manhattan Community College and the University of North Texas Clark also serves on the advisory board for The BeBop Corporation and has been a lead teacher in the ChiCa Power program at the Jazz House Kids.

Dr. Clark is extremely excited to be joining the faculty at the University of South Carolina in August 2021. As Assistant Professor of Jazz, Clark will teach a full drumset studio, jazz history and conduct/coordinate the big bands and small ensembles.