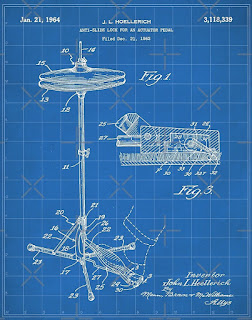 This is the first of a series of blog posts, a collaborative initiative between myself and Ted Warren, author of the blog Trap'd, and Todd Bishop of Cruiseship Drummer.

Awhile ago I proposed to these two accomplished and prolific bloggers that we each choose a subject and then each offer our own respective blog posts on each others topics. Hopefully between the three of us we'll have a collection of diverse ideas, concepts and perspectives to consider coming out of this. I am really looking forward to seeing what both Ted and Todd have to say and come up with!

For the inaugural post and topic I personally suggested exploring ideas about playing The Hi-Hat.

*I realize that this is a pretty vague and wide open topic but I actually did that on purpose!*

Anyways, here's a few ideas to get started, beginning with a collection of personal anecdotes and lessons I've learned from several amazing teachers over the years:

The Hi-Hat: A Series of Wake-Up Calls

Art Blakey is one of my all-time favourite drummers and always has been. One thing that appealed to me, even early on, was his driving sense of swing that really propelled the music forward. I was also really drawn to his approach and emphasis on the hi-hat when playing 2&4 with his left foot, which I think, along with a rock solid cymbal beat, greatly contributes to that propulsion that I mentioned (in fact, I read somewhere that Max Roach claimed that before Art came on the scene drummers didn't really play the hi-hat like he did, in terms of volume and emphasis). I also really enjoyed listening to Art and others play incredibly sophisticated and swinging drum solos, all while keeping a steady 2&4 on the hi-hat (and I think that when done right it's a great skill to have). Suffice it to say, this overall approach to playing the hi-hat with my left foot has served me well and something that I diligently worked on. I think it's an important skill and option to have, especially if you want to play straight-ahead jazz.

But, as I was soon to find out, there's also much more to it than that...

Rewind to the Summer of 1997 when I was attending the Banff Centre's annual jazz workshop and I found myself on stage with Kenny Wheeler during one of his composition workshops. I was playing the drums and about to read down his 3-horn sextet arrangement of a reharmonization he had written on the standard "What is This Thing Called Love?"

His arrangement started with a 16-measure drum solo and he counted it off only to stop the band and cut me off after my brief introduction. This happened about 3-4 times in a row (!)

"Don't play the hi-hat on 2&4" he said (politely of course) and remarked "...it's like you are trying to take a nap and there's this little cricket chirping, making all this noise, keeping you wide awake but you have no idea where's it coming from. And it's annoying."

Well, I tried (several times in fact) but I couldn't really do it! Up to that point my entire concept had relied on playing 2&4 on the hi-hat with my left foot and hadn't really considered otherwise.

I brought this up with Joe LaBarbera who would join the faculty later that month. His conceptual approach to using the hi-hat (both in terms of how and what to play, as well as his left foot technique) was a real eye-opener for me. "Keep it light and focus the time on the ride cymbal, otherwise the time can feel heavy, lop-sided" he remarked.

Fast-forward a couple years later and I found myself playing with Dave Liebman during a workshop at McGill University, where I was a student. I guess I hadn't completely figured it by then either (!) as he stopped us half way through the first tune, shook his head then proceed to take my hi-hat stand away and put it on the far side of the room (!) He counted off the tune again, we played and after a couple of choruses he turned around and remarked "That's much better!"

I heard Leon Parker play duo with guitarist Charlie Hunter at the Saskatchewan Jazz Festival around 1999-2000 (?) The collective grooves and interplay between these two were absolutely incredible and there wasn't even a hi-hat stand or a pair of sock cymbals in sight! (as I soon learned, Leon never plays with hi-hats)

I've also heard the great Roy Haynes play live on numerous occasions over the years. Not only was it common to see Roy not play his hi-hat, but often he would rest his left foot on the mid-part of the hi-hat stand for the better duration of a solo or the tune itself!

So, what does this all mean? Is the hi-hat an overrated timekeeping tool?

Around 2003 I found myself on stage playing with the great trombonist Curtis Fuller, performing as part of Betty Carter's Jazz Ahead program at the Kennedy Centre for the Performing Arts in Washington, D.C. The interesting thing about this is that, for him, I couldn't play the hi-hats on 2&4 loud enough! ("Give me that Blakey thing!" he constantly reminded me).

Similarly, when I had the opportunity to play with pianist Oliver Jones years later, his only comment to me was: "always give me lots of 2&4 on the hi-hat."

So what's the point of all these biographical musings you may ask?

Well, as I've learned, when it comes to using the hi-hat I think it's about all context and being able to access different musical options.

Playing a steady 2&4 is great and something we should all practice and use (to a certain extent anyway) but, as I learned the hard way (!) if you are playing music that requires more openness, rhythmic looseness and space, it's not really going to work (definitely not if you are playing it loud, anyways). The last thing you want to do is box anyone in rhythmically but if they are looking for that hard swinging, finger-popping groove, then give it to them!

Listening extensively to Roy Haynes, Elvin Jones, Tony Williams, Paul Motian, and Jack DeJohnette should all offer tangible examples to learn from (and don't forget Bill Stewart!) For me, these are the drummers that really expanded and explored how the hi-hat could be used in different ways. But don't dismiss 2&4 either. Listening carefully to drummers like Art Blakey and other great straight-ahead jazz drummers will inform your appreciation for how it can contribute to the groove and overall feeling in a positive way.

"You've got to listen to the music from the inside out!" - Kenny Washington

I think there is a lot that could be discussed here in terms of actual hi-hat vocabulary, coordination exercises, patterns, etc. but there is already a lot of great examples out there to practice (perhaps Ted and Todd might have some to offer). Overall I think having a fundamentally broad and flexible concept will always steer you in the right musical direction.

However, I will offer this idea, which has served me well over the years (I'm still working on it, in fact...) In addition to developing a conceptual approach and a vocabulary that allows for a broad use of the hi-hat in different musical situations, a significant thing for me has been...to learn how to play with a strong sense of groove, swing, rhythmic feel and flow without using the hi-hat at all!

That's right, you heard me correctly.

In my humble opinion, I think that if you can develop a strong sense time without having to rely on your left foot, then you'll build a strong foundation and set yourself up for all sorts of options, no matter if you want to play with the Kenny Wheeler's and Curtis Fuller's of the world or take a cue from Leon Parker.

Anyways, lots to think about and in the meantime, here's the great Peter Erskine with some great open/splash hi-hat techniques of his own: