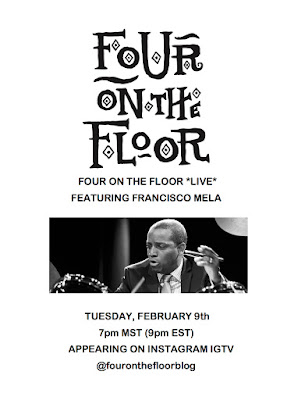 Please join me for the next action packed episode of Four on the Floor *Live* happening next Tuesday, February 9th at 7pm MST (9pm EST), appearing on Instagram IGTV @fouronthfloorblog featuring Francisco Mela!

I am looking forward to my conversation with Francisco and finding out more about his recent album release MPT Trio Volume 1 as well as his upcoming on-line solo performance on February 13th at the Soapbox Gallery. 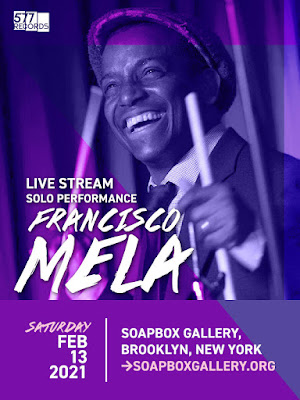 Francisco Mela is a favorite amongst jazz's elite instrumentalists, among them, Joe Lovano, McCoy Tyner, John Scofield, Cooper Moore, Willian Parker, Ingrid Laubrock, Esperanza Spalding, George Garzone, Kris Davis, Frank Kimbrough, Kenny Werner, Chucho Valdes, Hery Paz, Kenny Barron, Gary Bartz, Anthony Coleman and Juanma Trujillo, all of whom cite his charisma, sophistication, and life-affirming spirit as an extension of his incredible talents as a composer and drummer. Born in 1968 in Bayamo, Cuba. He moved to Boston in 2000 and, quickly thereafter made a name for himself on the Boston scene, becoming the house drummer at the legendary Wally’s Café Jazz Club. It was at Wally’s that Mela began developing a concept for his own band, one that would feature the sounds of modern jazz with the traditional music he grew up with in Cuba. World- renown saxophonist, Joe Lovano, heard Mela and was immediately impressed, hiring him shortly after to play in his quartet. Since 2005, Mela has been an integral part of Joe Lovano’s quartet and his new group, “Us Five,” a two-drummer quintet. Their 2009 Blue Note Records recording, titled Folk Art, was considered by many critics to be Lovano’s most adventurous to date. In 2009, he was tapped by jazz legend McCoy Tyner to join his trio. Said Tyner of his new young drummer, “Mela is just a fantastic player. He has his own style and his own sound, which is what I look for in a drummer.”