On the Road: Triplets & Bass Drum in the Middle 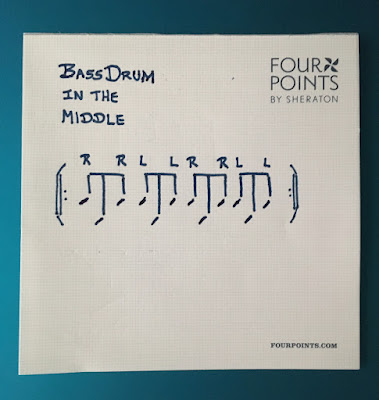 Practicing and keeping in shape (both drum wise AND physically!) can often be a challenge while on the road. Long car rides followed by short or drawn out sound checks often make it very difficult to fit in any sort of regular or productive practice routine while touring with a band.

One simple solution I have that works for me is to focus on ONE single idea or concept for a duration of time and then make the most of it during whatever limited practice time I may have. I also take my small, travel-size practice pad, a metronome and a pair of headphones with me everywhere I go.

I've recently been touring Alberta with vocalist and former CBC radio show host Tim Tamashiro, performing his tribute to the Rat Pack entitled "When You're Smiling". Here is a deceptively simple rhythmic concept that I've recently kept in my back pocket and have been trying to work on while on the road these days.

Bass Drum in the Middle

As you can see from the notation above, the pattern is fairly straight forward. It is a combination of triplets voiced between the hands and feet, with the second triplet played on the bass drum. Furthermore, pay attention to the specific sticking pattern as written (it's basically double strokes phrased as a shuffle).

I find this to be a tricky rhythm! Why is that you may ask? Well, for me anyways, it's close enough to many other hand-to-hand/bass drum triplet patterns that I've already been playing for years BUT just different and unfamiliar enough to make it feel slightly uncomfortable and make it a challenge. However, I might argue that whenever you play or practice something that is uncomfortable and takes you out of your comfort zone that this is actually a good thing!

Of course you can orchestrate the hands between the tom toms/cymbals however you want and it's probably a good idea to play the hi-hat on 2&4 or all four quarter notes as well.

*Heck you could even replace the bass drum and play those notes with the hi-hat (or why not play both feet together?)

**If you were feeling motivated (and have the time!) you could also go through the first few pages of Stick Control and play the columns down using the same concept above (ie. play the lines on the snare drum as a shuffle between the hands and then insert the bass drum on the second triplet of each beat).

Anyways, it's a simple idea but it's easy to remember and it has also kept me engaged pratice-wise while on the road lately.

Remember, take it slow and keep it swinging!