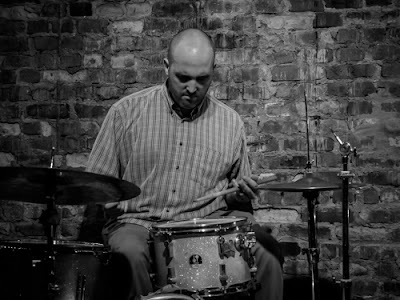 I've known Toronto-based drummer and composer Nick Fraser since the summer of 1998 when we both attended the amazing but short-lived Lake Placid Jazz Workshop in upstate New York. I've always known him to be an incredibly talented, creative and hardworking musician. Lucky for us here in Calgary, Nick is currently in town for a reprise of Decidedly Jazz Danceworks production of Juliet & Romeo, a modern re-intrepretation of Shakespeare's classic tale, which is currently running as part of Calgary's High Performance Rodeo from January 16-26.

Nick was kind enough to take time out of his busy schedule to answer a few questions about his role as the musical director and drummer for this current production.

What is the musical concept behind Juliet & Romeo? Can you describe your process behind composing and developing the music for this project?

I'm not sure that I can speak about a "musical concept" as in something that was preconceived before I started working on it. I often think of Stravinsky's idea that the notion of "inspiration" is backwards; people don't get inspired TO DO work, they get inspired BY DOING work. The process was that I wrote a whole bunch of music (and mined my existing catalog of compositions for things I thought might be suitable), then we recorded a demo of about 25-30 pieces that Kim Cooper (the AMAZING choreographer and artistic director of DJD) took and ran with. She chose the pieces that she thought resonated the most with the story/choreography/energy of the show that she was conceiving. Then we started rehearsing the show, where many of the details came into focus.

How does working with dancers, choreography and movement change or dictate your musical choices?

Well, it changes it a lot. The main difference is that the choreography is of a set length. So, if a band were to say, add 4 bars to a piece during a regular jazz gig, it would be pretty much a non-event. Whereas in a dance show, it would likely be disastrous. So, all of the musical choices that I'm making as a performer are based on knowing the timing of the show. There is improvisation (it's still jazz music, after all), but within a much stricter framework than I'm used to.  I should mention, too, that Corey Bowles' beautiful and topical text based on Shakespeare (delivered in the current production by Tasha Korney in what I feel is a shockingly great performance) is a major part of the piece. When we were working on building it, I remember referring to the show as "the three-headed monster" i.e. the movement, the text and the music.

Who are your influences as a composer?

Composers who I'm pretty sure have directly influenced my work as a composer: Anthony Braxton, Ornette Coleman, Tony Malaby, Lina Allemano, Kris Davis, Andrew Downing, Brodie West, Justin Haynes, Rob Clutton, Doug Tielli, Eric Chenaux. Most of those people are people that I've worked with and I've often felt that the most influential people are those closest to you.

Composers that I love, although I can't say how much direct influence there is, are: Wayne Shorter, Duke Ellington, John Cage, Anton Webern, Paul Hindemith, Bob Dylan, Thelonious Monk, Charles Mingus...and many more.

Can you tell us about the musicians you've chosen to perform this music and how they contribute to this project?

Well, Rob Clutton is the only bass player that I've worked with seriously on my own music. There are recordings of mine that have no bass player, but whenever there has been one, it's Rob. We have long and prolific history going back to the mid-1990s when I first moved to Toronto. He was the bass player in Drumheller (a cooperative quintet that was active for about 10 years) and is in my current quartet.

Jeremy Gignoux is a violinist and violist from Calgary (well, he's French, but he lives in Calgary) who I met while doing my first DJD show, New Universe, under the direction of the godfather of New York free jazz, William Parker. Jeremy is a great improviser and brings a real eclecticism to his work. He's comfortable in fiddle music, folk music, classical traditions, jazz and more. That breadth is something that is a real treat to work with.

Carsten Rubeling plays the trombone. He has a beautiful sound, is an absolute sweetheart and brings a great energy and polish to all the performances. He is also from Calgary and has recently released a great jazz-funk-fusion record called Volk.

How do you find your being a drummer/percussionist influences your compositional decisions?

It's hard to say, because I don't know any other way to be! I guess that most of my pieces have a rhythmic idea at their core, although some have more of a melodic idea. There's a Twitter account called "jazz is the worst" and one of the tweets reads: "Jazz drummers tend to write avant-garde music... because their knowledge of harmony is so limited". This is hilarious and it is certainly true that the use of harmony in my music is usually somewhere between pedestrian, accidental and non-existent. I guess I've tried to make the best of my limitations.

The Decidedly Jazz Danceworks production of Juliet & Romeo runs from January 16-26 at the DJD Dance Centre in Calgary. For more information and to purchase tickets please visit: www.decidedlyjazz.com