Many years ago, when I was just getting started in this whole business of Jazz drumming, Toronto drummer Ted Warren gave me a great piece of advice that I still think about quite a bit and has been an invaluable tool in my development as a musician. I still incorporate this into my regular practice sessions and recommend it to all my students.

This brilliant piece of wisdom that Ted laid on me was that I spend some serious time practicing along with recordings of other great Jazz drummers, and any recordings in general that I enjoy listening to, in order to get my sense of time together.

I like to practice my rudiments and basic beats and patterns along with a metronome and we should obviously all spend time with one in order to develop a consistent sense of time. But in terms of developing my timekeeping AND musical sensibilities, playing along with recordings (both with and without drummers) has been and will always continue to be an invaluable learning tool.

Of course metronomes won't speed up or slow down and we need this steady reference point in order to learn how to play time in a steady, consistent way. But there is a lot to be said for learning to play in a way where, perhaps, the tempos do, in fact, move a little (and this isn't necessarily a bad thing....Ted called this the "human" element of timekeeping) and, importantly, how to play in the context of a musical performance. Really you can and should be able to practice playing at least a simple beat along with any recording. It really forces to you listen intensely and develop your listening skills (especially if the bass and/or drums are low in the mix).

For myself, playing with any recordings of Thelonious Monk's (ex. Monk's Dream) or Miles Davis (ex. Workin', Cookin', Steamin' and Relaxin') are always recordings that I find myself going back to (among many others.)

Also, there is a lot to be said for playing along with a given drummer, trying to get "inside the head" of that particular drummer's style. Trying to match, to a certain extent, the cymbal phrasing, style and feeling of another drummer is only going to benefit your own playing and development.

Adam Nussbaum recommended to me playing along any of the early Nat King Cole trio recordings.

Years ago in a clinic with the Ed Shaughnessy, he recommended this particular Oscar Peterson record:

In the back of his book "The Art of Bop Drumming", John Riley recommends the following drummer-less albums to play-along with:

Personally I recently discovered this album and have been enjoying this quite a bit (thank you Brad Shigeta for hipping me to this one...): 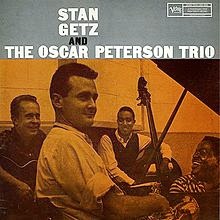 The interesting thing about playing with albums that don't have a drummer is that you can experiment with injecting your own ideas and stylistic interpretation without concerning yourself about identifying with the existing drummer on a particular track. Plus it's a great way to learn tunes, expand your repertoire and develop a "functional" approach to timekeeping (by observing the form of the tune, the melody, etc.)

Sometimes even just playing quarter notes on the ride cymbal along with one of these records will give your playing a real boost. Start simple and then add different parts of the drum set and layers of rhythmic complexity, all while trying to blend in with the "band."


For example, here's some interesting footage of Carl Allen playing along with a Gary Burton/Chick Corea duet and coming up with, I think, some pretty interesting conclusions:


A few other excellent drummer-less resources that I personally like to practice along with and highly recommend these days include:

- Any of Peter Erskine's play-along apps available for your iPhone or iPad:

- The play-along tracks that accompany the Steve Smith/Adam Nussbaum brush DVD "The Art of Playing with Brushes" are very good too:

And another thing: use your headphones but try to play along with all these resources while playing them through speakers too. You'll have to simplify, play really quiet and really focus on what you are playing along with. And that's a good thing!

So the next time you are wondering what to practice, put on a favourite recording and learn from the greats!

What are your favourite albums to play-along with?