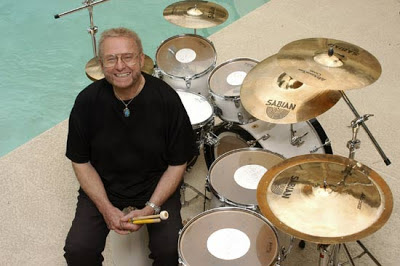 It was with great sadness that I learned of Ed Shaughnessy's passing this past weekend. Ed was one of the great big band drummers of our time who was probably best known as the driving force behind the Tonight Show band for 30 years in addition to have played and recorded with many of the world's jazz greats.

I first met Ed at a Bands of America marching band competition in Indianapolis while I was still in high school and I always made a point of talking to him when I ran into him at a PASIC or IAJE convention. He was always very nice and made a point of showing a genuine interest in what it was I was doing as a drummer. I only met Ed a handful of times but we kept in touch via email over the years and he was kind enough to offer me some amazing stories of his experiences growing up in 1940s New York and chasing the greats along 52nd Street, hanging out with the likes of Big Sid Catlett, Gene Krupa and Buddy Rich and how he survived some blistering up tempos, playing Cherokee and such, sitting in with Bud Powell, Don Byas and others. He also sent me a very nice note a few years ago as he was apparently an avid reader of this blog and encouraged me "to keep up great work kid!"

Ed's granddaughter was thoughtful enough to put together a nice little interview with her grandfather before he passed away:

I also recently received the following from John Riley who was nice enough to share his own personal correspondences with Shaughnessy.

This is a selected discography of what Ed considered to be his favourite recordings that he played on: 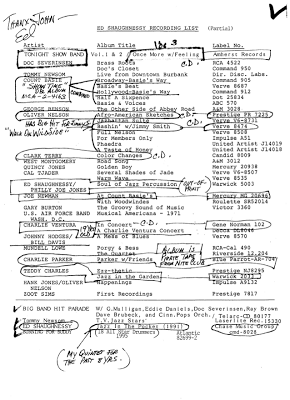 As you can see from above Ed had a very diverse recording career with a wide array of artists (man, he recorded with Charlie Parker!!!)

And here is a very thoughtful thank you note that Ed sent John. I think this really sums up the warm spirit that Ed was and also reveals a hint of the importance of the musicality that he himself valued and brought to the bandstand. 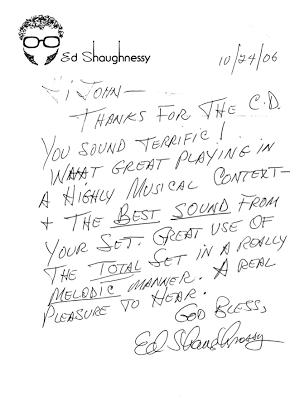 I also attended many of Ed's clinics over the years and still have those handouts around here somewhere, full of some very useful and practical information. I will make a point of scanning those and sharing them here later this week once I catch up a bit. Things have very busy of late as I personally just returned from Edmonton where I spent an incredible weekend playing with pianist Dave Braid and his brass quintet project at the Yardbird Suite. I don't use the term "Musical Genius" very lightly but I would certainly put David Braid into that category....I also had the good fortune of subbing for Matt Wilson last week with Oran Etkin's Timbalooloo project at the Calgary International Children's Festival with Wycliffe Gordon, Charenee Wade and bassist Linda Oh. Needless to say it's been a good few months of MUSIC for me although certainly busy ones at that! Anyways, I'll get those handouts scanned....I'm sure Ed would have liked for people to see and get something out of them.

Thank you Ed for your great music and I'm sure the band is swinging wherever you are now!