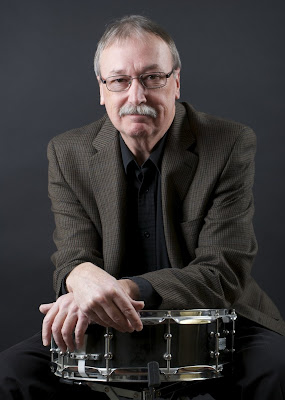 Here's another today of the Barry Elmes Quintet from a recent show at the Rex Jazz Bar & Hotel (Toronto) and tribute to CBC Radio host Katie Malloch:

It's nice to see the CBC investing in high quality footage of these concerts. Let's hope that this trend continues (it's really a shame that they did away with those Jazz Beat studio sessions several years ago...) Does anybody happen to know if the other two Katie Malloch tribute concerts in Montreal and Vancouver were filmed as well?

Drummer Barry Elmes will always have a special place for me. Thanks to several CBC radio broadcasts during the early 90s, Barry was one of the first Canadian Jazz drummers that I heard that really caught my attention. In fact, CBC radio was a HUGE part of my early exposure to not only Jazz music, but Canadian Jazz artists. Barry's distinctive style & sound, reminiscent of Max Roach and Dannie Richmond, really resonated with me and still does today.

He's also been a big influence of mine in terms of being not only a swinging and melodic Jazz drummer but also a successful drummer/composer and drummer/band leader as well. In fact, I'd have to say that Barry is one of my significant influences as a composer and I really appreciate his quirky and imaginative bebop approach to writing music that draws from the language of Charlie Parker, Charles Mingus and Ornette Coleman in a very playful and engaging way combined with a strong feeling for melody and the blues. He also has a unique way of integrating the drums into his arrangements and he is very clever about how he chooses to involve the drums within an ensemble.

If you have the opportunity to check out Barry play (actually I believe he will be touring Canada this summer during the Jazz festival season) make sure you do so. In particular, check out his impeccable hook up with the bass player. Hearing him play with either Al Henderson or Steve Wallace is always a real lesson in how a drummer and bassist should play together.

In particular there are several groups that I've enjoyed of his over the years including the Barry Elmes Quintet, Time Warp and DEW East and I highly recommend tracking them down.

Here's a few to check out:


You can learn more about Barry Elmes over at his website here and Andre White has a great interview with Barry over at his fortunately still existing Canadian Jazz interview website Jazzview.ca here.
Posted by Jon McCaslin at Wednesday, March 28, 2012