I often get many e.mails and inquiries from different Jazz musicians from across the country asking me about the state of Jazz in Calgary and, in particular, what's going on with regards to the Calgary Jazz Festival (which, regrettably, imploded two years ago!) Fortunately, concerned people have been mobilizing in town and things are looking up. Here is a copy of the recent press release that recently went out that that effect:

There’s good news for Calgary’s jazz community. The changes initiated at the Calgary Jazz Summit last September and detailed in the Action Plan endorsed at the Second Summit in October 2011 are moving forward. The new Board of Directors at Jazz Is has begun its work and new programming is on its way.

After the collapse of the jazz festival in June 2010, CADA hosted an open meeting for all people interested in the future of jazz in Calgary. The Calgary Jazz Summit evolved out of this with a group of volunteers organizing an on-line survey and a study of jazz festival best practice that led to the first Jazz Summit in September 2011. The participants of the Jazz Summit articulated their vision for a strong jazz organization that would support a vibrant year-round jazz scene in Calgary and, in due time, consider the rebirth of a festival. See all the Summit results at: www.calgaryjazzsummit.com

A working group was formed after the first Summit to develop an action plan to realize this vision. Recommendations and a first year action plan were resoundingly supported by the participants at the second Jazz Summit in October 2011. These recommendations were to:

- Develop a transparent and accountable governance model including a business plan

- Raise funds in order to present events, as well as to sustain and grow the society

- Facilitate further educational opportunities in collaboration with other events and organizations

- Develop a multi-layered approach to the presentation of jazz events.

These are exciting developments for jazz in Calgary and we need your input and support. If you are interested in contributing your ideas, time or other resources to help Calgary’s jazz community realize its vision for a vibrant and sustainable year-round jazz scene, please contact us at info@jazzis.org or through the volunteer window on the Jazz Is website www.jazzis.org 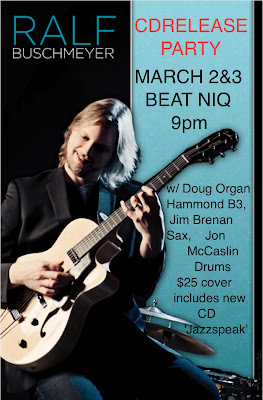 Ralf is one of Calgary's pre-eminent Jazz guitarists and he sounds absolutely incredible these days. His influences range from the likes of John Scofield, Mike Stern and Pat Metheny to Wes Montgomery, Grant Green, Lorne Lofsky and Peter Bernstein. I've been learning Ralf's great tunes and listening to his CD all week (this also means listening to some GREAT drumming courtesy of John Riley and Jesse Cahill who both appear on Ralf's disc) and I can tell you that you are in for two great nights of world-class Jazz guitar.

The new CD is called Jazzspeak and features Ralf with 3 bands from various regions. The first band is a B3 organ trio, featuring John Riley (drums) from New York and Michelle Gregoire (B3 organ) from Winnipeg. The next group is a Vancouver quartet with Bill Coon (2009 National Jazz Awards Jazz guitarist of the year), Jodi Proznick (bass) and Jesse Cahill (drums). And finally with the Toronto group known as "Folkalarm" featuring Kevin Breit (Norah Jones & Cassandra Wilson's guitarist), Russ Boswell (bass) and Jorn Anderson (drums).

The release party at the Beatniq will feature Edmonton's own Doug Organ on the B3 organ, Jim Brenan on saxophone and Jon McCaslin on drums. This same band will be appearing for the Edmonton CD release at the Yardbird suite on May 26th.