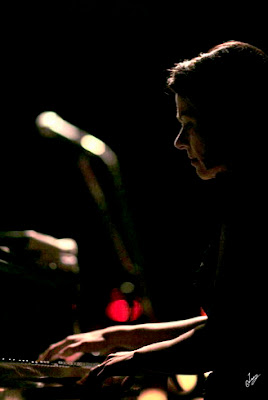 It's been awhile since I've featured any Calgary musicians in my Calgary Scene column but I'm happy to be back at it today and feature the very talented and hard-working pianist Tricia Edwards.

Tricia Edwards is a Calgary area pianist. She was the recipient of the 2009 Richard Harold Cowie scholarship, given by the Calgary Musician’s Association and C-Jazz. She released her debut jazz CD “Joyspring” in March 2009. The Tricia Edwards Quartet performed as part of Calgary’s 2009 Jazz Festival and she also played as part of the 2010 Sylvan Lake Jazz Festival with vocalist Deanne Matley. Her most recent public performance was November 12, 2011 with the Latin jazz project “Quinteto Alegria” at the Beat Niq Jazz and Social Club. Tricia earned both Masters and Bachelors degrees in classical piano performance at theUniversity of Alberta. She then spent the next several years performing solo and chamber music, teaching and working as a free-lance accompanist in Edmonton, the Middle East, and Calgary. She was on faculty at both the Alberta College and Mount Royal College Conservatories.In the fall of 2003, she began studying jazz piano and bass. She now works primarily as a jazz and salsa pianist, playing with Quinteto Alegria, the Wednesday Night Big Band, Calgary Jazzwinds, Orquesta Latin Combo, and Tropicalgary, plays solo piano regularly at the Delta Bow Valley lounge, as well as freelancing with many local groups and musicians.


1) Can you tell us about your musical background?
How did you learn to play jazz?

I came to jazz by happy accident. I have spent most of my musical life in the classical realm. I started piano lessons in grade school, moved through the Royal Conservatory exam system and went on to do Bachelorʼs and Masterʼs degrees in piano performance at the University of Alberta. Right after graduating I moved with my husband to the Middle East for a couple of years and there had amazing opportunities to play with local and visiting musicians from all over the world, as well as teaching. After coming back to Canada, I taught at both Alberta College and Mount Royal College Conservatory and worked as a free-lance accompanist.

In 2003 I was preparing for a solo recital after a hiatus from playing, and...this story is such a cliché Iʼm embarrassed to tell it...I did too much too soon and ended up with tendinitis. So after taking some time off and still in the process of recovering, I started taking jazz lessons with Derek Stoll, on a lark, really. I hadnʼt tried improvisation before, but Derek is an inspiring teacher. I was instantly completely hooked. Since then I have taken lessons with local players, attended the Mount Royal College summer jazz camp, the Jamey Aebersold summer jazz program and this summer I went to New York for lessons and lots of listening. Also jam sessions and gigs often have the potential to be free lessons, and I am grateful for the generosity and support of the local musical community.

I did my Masterʼs degree with a great Canadian classical pianist, Stéphane Lemelin, and I have to say that even though Iʼm doing something very different now and itʼs many years later, I can still hear his voice in my head! And his playing is a standard I aspire to.Francois Bourrassaʼs quartet was one of the first jazz events I attended. I still go every time heʼs here and listen to his CDʼs regularly.

I remember one of my lessons with Derek Stoll - he played a montuno with a left hand tumbao (ok, I had really lived in a tiny musical bubble up to this point) and I remember it grabbing my brain. So I started listening to Latin jazz. Chucho Valdes, Michel Camilo, Rubalcaba, Danilo Perez - all favourites.


3) Name your top 5 favourite albums and how they have influenced you.

Top five is impossible, but hereʼs five that come quickly to mind. The only jazz album I owned up until about 7 years ago was Kind of Blue. Those tunes were floating around in my head before I understood anything. Anything by Bill Evans. Chucho Valdes, New Conceptions, Mstislav Rostropovich and the Bach solo cello suites. I keep coming back to this one. Right now Iʼm listening to Danilo Perez' "Central Avenue" and really enjoying it.

My lessons in New York this summer (with Peter Zak and Michael Weiss) made me think about voicings more carefully than I had been. Itʼs like a big puzzle and I can sit for hours trying to figure things out. Also, transcribing wasnʼt a part of my training and it took me an embarrassing amount of time to figure out what the fuss was about. Now Iʼm trying to exercise that (weak!) musical muscle because I realize itʼs key. Also I was fortunate enough to get involved in the salsa scene in Calgary recently, so
Iʼve been working really hard at that. And then by extension, figuring out how that can feed into jazz.


5) What interesting projects do you have on the go at the moment?


6) You are in a unique position by having such extensive training as a classical pianist that also plays jazz music. How would you describe how your classical training has influenced your jazz training and vice versa?

OK, so I havenʼt figured this out yet. Is it cheesily quoting “Fũr Elise” in my solos? (Yes, guilty.) Or just letting the subconscious stew of all past musical experiences come out how they will? I will keep you posted. And when I play classical music now, I now have a greater appreciation for and insight into the composerʼs mind.


7) Favourite place to eat in Calgary?