The Monday AM Paradiddle

Not much to report today but here's a few things on my mind:

-I hit the Broken City Jam session on Saturday afternoon (keeping in my mind my previous two posts of jam session etiquette, of course!!!) and was treated to Edmonton's Jerrold Dubyk on tenor and Bill George on drums joined by my frequent Calgary comrades Rubim DeToledo on bass and Ralf Buschmeyer on guitar. Fine playing, as always, from all and Jim Brenan (tenor) and I sat in for a few numbers including a spirited, up tempo tenor battle on a rhythm changes.

It was also nice to see such a large crowd come out (although not that many musicians this week?) to support Calgary's premier and longest running jam session. This is a well run session and an important part of the local scene. Make sure to support your local jam session wherever you are.

-I stopped by Bob Everett's vintage drum shop BEAT IT in Calgary last week and marveled at his large collection of vintage Ludwig drum sets. If you are looking for a nice sounding, vintage Ludwig chrome-over-brass Superphonic snare drum, Bob is definitely the guy you should talk to.

He also had a set of thin 13" K.Zildjian hihats from the 1930s that sounded very nice. I played around with them and made a few interesting observations: They were really quite quiet when I played them with my left foot (2&4) no matter how hard I stomped on them (!) However, when I played them with my sticks (a la Jo Jones) they totally had that sound and feel that I would associate with the style of 1930s big band drumming. What really surprised me was how bright these hihats were but the more I thought about it, it really made sense. Of course drummers didn't really play 2 & 4 with their hihats back then, but the brighter sound when played with sticks would allow them to really cut through a full brass and horn section. I haven't played many old K.Zildjian hihats so this was a bit of a revelation for me.

-Here's a few more things that caught my attention over the weekend: 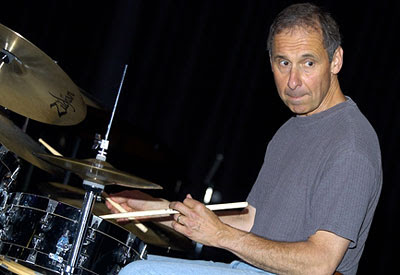 -Check out this great footage of drummer Joe LaBarbera performing with Larry Goldings:

I was fortunate to study and work with Joe at the Banff Centre for the Arts during the summer of 1997 and it's always a lesson in itself to check out his loose and flowing technique around the drums. I've actually been meaning to check out his album "Mark Time" as a leader for some time now.

-And finally, here's the Master himself Roy Haynes (thanks to Bill in Minnesota for finding this one!):

Check out the expression of bassist John Patitucci as he watches Haynes play. I love that and wouldn't that be great if everyone treated their drummer's with that sort of reverence and respect ? : )