Another exciting day at PASIC 2010 featuring many of the world's finest percussionists.

Here's a rundown of the great sessions I checked out:

-The morning started with a high energy master class on Brazilian drumming from Marcus Santos. Topics included techniques to develop "Ginga" (or the proper feel/soul/spirit of Brazilian rhythm), his individual approach to playing all the instruments of a Brazilian Samba school by himself at the same time (!) and the hour concluded with a mass, high energy arrangement featuring special guests Bill Bachman, Memo Acevedo, Vera Figueiredo and Aldo Mazza (among others).

-Cuban latin Jazz drummer and Dizzy Gillespie alumnus Ignacio Berroa demonstrated his unique approach to fusing straight ahead Jazz rhythms with traditional Afro-Cuban rhythms. He does this very well and I'm always impressed with Berroa's great sense of swing. I really dig how he mixes the influences of Roy Haynes, Elvin Jones and Tony Williams with a really distinctive Afro-Cuban sensibility. And as he said so eloquently when explaining his tremendous left foot clave versatility: "All you really have to do is practice!" And he's right !

-Timbalero Ralph Irizarry and conguero Kachiro Thompson did a great job demonstrating many common and basic Afro-Latin grooves and simple bell variations in their morning session. Irizarry is also featured on the LP DVD "Drums Solos Revisted". Highly recommended. Check that one out as well !

-New Orleans native Stanton Moore gave an excellent master class on his approach to studying drummers such as Clyde Stubblefield, Jabo Starks and Zigaboo Modeliste and how he's taken from them and fused that into his own personal style. Stanton plays with a great beat and a huge, fat sound with that real slippery, greasy and in-between-the-cracks New Orleans feel. Later in the evening his trio played the feature concert to a full house and had everybody tapping their feet to his infectious grooves and slick arrangements. I really dig the bigger "auxiliary" bass drum that he's got connected off to the side that he lays into when the grooves go into 5th gear. The rest of the band was great too. In particular I really dug the organ player (who sometime slid in a few Larry Young references from time to time....nice!)

-Studio drumming legend John "JR" Robinson demonstrated many of his classic beats and his signature back beat during his late afternoon session. Robinson is one of the most recorded drummers EVER and I really appreciated his no nonsense approach to playing time and making a song sound good. His groove was rock solid and he never resorted to over the top drum tricks or any circus drumming to get his point across. A real drummer's drummer.

-Interestingly enough, I ran into both Bernard Purdie (groove legend) AND the infamous Buck Nelson (the first drummer to mic the drum stool, inventor of the patented "Gorilla Grip" and author of the acclaimed youtube drum instructional "Lifting The Cloak of Mystery off Rock Drumming")on the convention floor this afternoon. What are the chances happening...

-You'd be surprised what world famous drummers take double espresso shots, two creams and two sugars in their morning java. There's a Starbucks in the lobby of my hotel, always a long lineup too and no lack of celebrities waiting in line.

-I spent some time at the Remo booth in the expo hall this afternoon admiring the drum set on display and set of Bosphorus cymbals that Jeff Hamilton used for his performance yesterday. In particular I really took note of the way he had his drums tuned. They sure sounded/felt great and that was a real lesson in itself. And Jeff wasn't even there ! 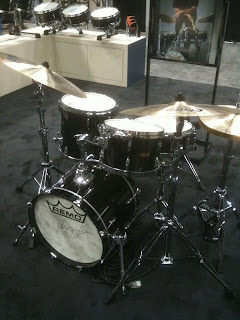 -The best session so far of the conference (In my opinion anyways!) was given this afternoon by drummer Matt Wilson (aka "The Allower"). Disguised as a sonic superhero (complete with a cape and hat!) Matt played a brilliantly melodic and musical solo on a very nice set Craviotto drums and Zildjian cymbals (although he can truly play anything and make them sound like gold!) Matt talked very eloquently about the role of a drummer in a musical situation and his overall philosophies on "allowing" musical situations to happen, how to bring out the best in other people and how to develop an overall flow to the music. One brave soul volunteered to get up on stage and act as Matt's guinea pig and go through several of Matt's ride cymbal "meditation" exercises (he did great, I thought) Matt is a great drummer and an incredible human being but he's also an amazing teacher as well (I should know!) and he has a real gift for conceptualizing and putting into words the seemingly "magical" elements of music and drumming that are required of us as Jazz improvisers and often so elusive and hard to teach/learn. A very inspiring session on many levels for sure and one that brought back great memories of my lessons with him six years ago in New York. I'm only sad that I didn't make it in time for the free popcorn....but I did catch Matt's "drum tech" take care of business before the show. Between having a drum tech and a new Christmas CD release (this is a GREAT CD btw - go out and buy it for xmas!)....Matt you've truly arrived and hit the big time now haven't you!!! : ) 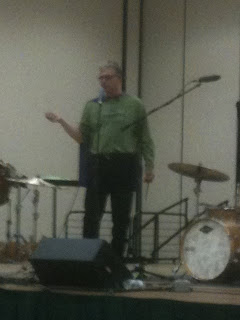