Well today was an action packed day and a great start to the proper conference schedule. I also ran into a lot of old friends between running back and forth between sessions.

A few of my highlights:

-The morning started off with my attending the PASIC Drum Set Competition Finals with judges Matt Wilson, Jeff Hamilton and Stanton Moore presiding. I only caught the first three contestants in the Jazz category but they all sounded GREAT (and they were all very young!) I heard lots of great music coming from those guys this morning. A great way to start the day and I'm sure we'll be hearing more of those young cats in the years to come.

- Jeff Queen gave a great snare drum and technique masterclass entitled 4x4x4=Drumming For Life. I particularly appreciated his breakdown of his method to teaching buzz and double stroke rolls. Queen ended his session with his famous solo "Tribute" that showcased his incredible facility and snare technique.

- Conguero Samuel Torres demonstrated his melodic approach to contemporary conga playing that featured no less that seven tuned congas (!) Memo Acevedo provided some tasteful backing playing clave rhythms while Torres tore it up on the congas. He concluded his session to a backing track featuring an Afro-Cuban groove in 5/4 that featured an interesting odd meter clave I'm going to have to check out some more (sounds like Conor Guilfoyle territory!)

-I revisited my drum line days from my youth and checked out the Cadets drum line and front ensemble. They demonstrated several of their warmups/exercises/etudes as well as excerpts from the drum book to their show "Toy Soldier". I was impressed with Colin McNutt's philosophy on integrating musicial concepts into their stock exercises and warm ups. The snare drum line ripped off some VERY impressive paradiddle patterns.

-Vibraphonist & marimbist Dave Samuels performed a concert with his trio Triastic featuring percussionist Arturo Stable on a very interesting hybrid hand percussion/drum set and bassist Edward Perez. The group performed very spacious and involved improvisations on tunes such as Wayne Shorter's "Footprints", Billy Strayhorn's "Lotus Flower" and the standard "You and The Night and The Music". These musicians had a great connection and I appreciated the listening and overall interaction going on between them.

-Drummer and brush master extraordinaire Jeff Hamilton lead his trio featuring Christoph Lundy on bass and Tamir Hendelman on piano. The band swung hard from the very first note (a tasteful shuffle) and I was blown away by Hamilton's opening roll/fill that launched the trio so exceptionally. Perhaps the greatest drum intro I've ever heard in person (no count off either....just "BANG!" and we're off to the races....here we go!) Hamilton stressed the importance of really playing for the music and respecting the arrangement. He also made some insightful comments about approaches to feathering the bass drum (which I'll discuss further and more in depth in a later post). The session concluded with Jeff pulling out all the stops on a melodic drum solo version of Juan Tizol and Duke Ellington's classic tune "Caravan" with the melody clear throughout. Swingin' !

-I wandered around the industry expo but could only take it so long as it was really LOUD and a bit chaotic in there. I did, however, find some good deals and made my requisite stop at the Zildjian booth to check out their latest cymbals. I had a chance to play some new prototypes including three china/swishes that have been designed to replicate the sound/feel of Mel Lewis' old Swish A Knocker. They sounded great and totally captured that classic sound.

Also on display were several cymbals that Adam Nussbaum has been designing in collaboration with Zildjian. Those were very different to my ear (very dry, I thought...) but great nonetheless. One ride, in particular, had a very unique combination of lathing techniques on the top and bottom.

They had one Kenny Washington "Bounce" ride on display too (or maybe there were others hiding...) but this one I really quite liked and spent a considerable amount of time playing around with it. I think they went to extra lengths to copy the bell of Washington's old K as the bell seemed much shallower/flatter (?) than other K Constantinoples I've seen and played in the past. Anyways, their attention to details has sure payed off. There were several of those cymbals on display last year as well, but this one really stood out for some reason. I'm sure it won't last long on the display floor!

I sure appreciate the direction that Zildjian and Paul Francis are going with the company in regards to collaborations with Jazz artists such as Adam Nussbaum and Kenny Washington. I'm looking forward to hearing what else they have in store for us in the future....although, I don't really need any more cymbals at his point (or....do I ? Steve Weiss DID have some good deals on cymbal bags. Hmmm....) 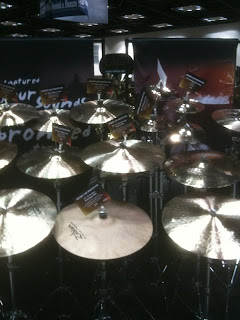