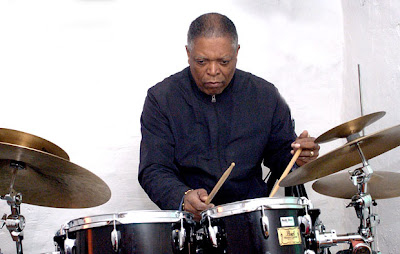 Billy is an amazing drummer who plays with an extreme range of dynamics. Here is a crude but very inspirational clip (to me anyways!) of Hart in a solo spotlight:

And here playing in trio with guitarist Assaf Kehati:

Billy is also a master brush player and was recently featured on the lastest brush instructional DVD produced by Adam Nussbaum and Steve Smith for Hudson music. Check that out if you are interested in learning how the Master's play the brushes. More on that later in the days to come....Here is Hart demonstrating his unique approach to playing Latin music with the brushes:

And of course, saving the best for last (!), here is Billy Hart playing "There is No Greater Love" at Birdland with an all-star band of epic proportions consisting of saxophonists Joe Lovano, Dave Liebman and Michael Brecker with Rufus Reid on bass and Phil Markowitz on piano:

I was fortunate to study with Billy during the summer of 1998 at the Lake Placid Jazz Workshop held in Lake Placid, New York.
BIlly is a great teacher and speaks from a lifetime of experience - he's literally played with all the greats. In particular, he was quite keen to hang out with us and work with us group of drummers on a daily basis and well beyond the scheduled master classes. Hart had us set up multiple drum sets and invent arrangements for this mass "drum choir" where we could all play together. He was very insistent about us learning tunes on the drums and becoming familiar with the melodic language of bebop learning pieces such as "Blues for Alice" and "Anthropology" on the drums.

Another memorable Billy Hart story....when I was studying with Matt Wilson in New York City during 2004, I eagerly made the trek to the Fat Cat to hear Billy's quartet with Ethan Iverson, Ben Street and Mark Turner. Well, for some reason, Mark never made it to the gig so the band just played trio. I gather the group usually plays original compositions but considering the circumstances they just played an evening of standards. It was a delight and a real lesson to hear these musicians burn on a set of classic tunes (pieces like "Solar"). I'm sure the original tunes they intended to play would have of been great and most likely repertoire documented on this great album: