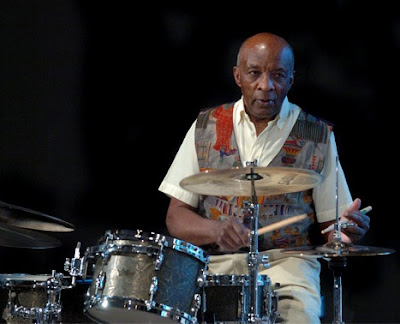 It's with great sadness that I have just heard and now report that the great master drummer Ed Thigpen passed away today in Copenhagen at the age of 79 after a lengthy illness.

Thigpen, who was aptly nicknamed "Mr. Taste", is probably best remembered as the drummer with the Oscar Peterson Trio (along with Ray Brown on bass), as a sideman to so many jazz greats and as a leader of his own various ensembles. (Check out his album as a leader "Out of The Storm")

My first introduction to "Mr. Taste" came when I was a teenager having heard the Oscar Peterson albums "Night Train" and "The Canadiana Suite". His swinging groove and tasteful dynamics made a great impression on me as he was one of the first serious jazz drummers I ever heard and checked out.

My father also purchased a copy of Canadian jazz pianist Oliver Jones' 1991 album "A Class Act" following his performance at the Regina Jazz Society with bassist Dave Young. This disc got a lot of airplay in our household for weeks afterwards. One track that stood out for me was "Stan Pat", a calypso written for Montreal pianist Stan Patrick and featured an extended drum solo for Thigpen using a plethora of Caribbean rhythms. My father is still asking me when I'm going to play that tune !

Thigpen's brushwork also impressed me and I promptly purchased his book entitled "The Sound of Brushes". This became an important part in learning my brush technique and installed a sense of appreciation and awe for the art of brushes that continues to this day (see some of my previous posts for proof of that !) Shortly afterwards purchasing this great book, I met Ed Thigpen in person at the Remo drum booth in the convention hall at the 1995 IAJE convention in Anaheim, California. I remember thanking him for writing such a great book and he was nice enough to give me a short brush "lesson" after I told him I couldn't figure one of his uptempo brush patterns.

Well, he made it look easy and I'm still trying to figure that one out !

Here's a shot of Thigpen featured with Billy Taylor from 1958 on a superb drum feature entitled "Titoro". Dig not only his intense rhythmic approach but the variety of creative sounds he gets out of such a small collection of drums and cymbals:

Inspiring stuff ! I also appreciate the profound influence of Papa Jo Jones in that clip - one of Thigpen's early influences.

And here's Ed Thigpen in his element, swinging with Oscar Peterson & Ray Brown - the classic trio - from a live concert in Italy (and later with special guests Herb Ellis and Roy Eldrige sitting in):

And finally, a swinging performance of Oscar Peterson's "Reunion Blues" from a television date in London circa. 1964:

I think this is a fitting tune to finish this post as I'm sure Ed is now in heaven, reunited with his old friends Oscar and Ray, no doubt sharing some laughs and great music while sitting in the big jam session in the sky...