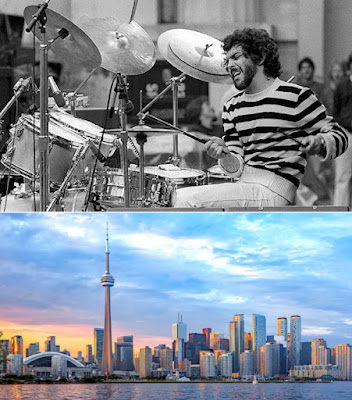 Sorry for the radio silence as I've been on the road lately, working in Toronto with Canada's premier jazz dance company Decidedly Jazz Danceworks.

I've been working with this dance company regularly since 2011 and every production I've had the privilege of being a part of, under the direction of artistic director/visionary Kimberley Cooper and musical director/bassist Rubim DeToledo, is a creative adventure that consistently challenges my abilities and raises my musical bar. The results of these shows and the process of creating these productions are never anything short of an inspiring creative journey that combines jazz music and contemporary jazz dance at the highest level. I feel very lucky to have the opportunity to work with this dedicated group of talented artists.

It was quite a busy week, filming and performing at the Fall For Dance North festival at Toronto Metropolitan University and I'm really proud of what we accomplished. However, I did still manage to get out as well and hear some live music and I heard many great drummers that week including:

Terry was my teacher during my brief stint in Toronto (2007-2009) and it's always a pleasure to hear him driving a band (I'd also venture to comment that he was really in his element that night playing this particular music and of course Kirk and Pat were on fire as always!)

• Montreal's Doxas Brothers Quartet at the Jazz Bistro with the always inventive Jim Doxas on drums.

Jim and I were both students at McGill together during the late 90s and he was really great, playing with a dynamic and adventurous style even way back then!

Barry was one of the very first Canadian jazz drummers I ever heard (initially on CBC Radio back in the day) and his unique style and creatively clever compositions have been an inspiration and influence of mine for the past 30 years.

• Finally, I capped off my visit to T.O. with a long subway ride on the Bloor line to check out a set at the Etobicoke Jazz Festival featuring Alex Dean's four saxophone Tenor Madness band backed up by the Donnybrook Trio, with my bud Jeff McLeod on organ and the always hard swinging Morgan Childs on drums.

Morgan moved to Toronto from Vancouver at pretty much the same time I left Toronto for Calgary a little over a decade ago but it's always a pleasure to hear his super swinging cymbal beat, supple comping and to watch him drive a band.

Anyways, my time in Toronto was really great and now it's back to our regularly scheduled programming.

If you've followed Steve's career you'll recognize that this particular piece has been a part of Steve's repertoire for a long time.

• Dig the graceful way in which he plays this. Even by just playing rudiments on some sort of hollowed out piece of furniture acting as a drum pad (?) you still get a sense of the flow and relaxed feel that he is famous for. Listen to the sound he gets and watch the form and movement of his hands. Appreciate the graceful sense of flow he achieves. This, in my humble opinion, is what we, as jazz drummers, should be striving towards when playing, working on rudiments and applying them to the drum set.

• Some minor gear observations from the photo above, at the top of this blog post (presumably taken sometime in the 70s or early 80s...and assuming that he is playing his own drums?)

Is that ride cymbal an old cracked K with a significant chunk missing from it? Was that his go-to cymbal at some point? This reminds me of Mel Lewis' infamous old K that also had a chunk missing.

Also notice the two-cymbal stack to his far right. This sort of thing seems to be a real trend nowadays but Gadd was obviously exploring this a long time ago!

And finally, I heard somewhere that Steve used a Ludwig Superphonic snare drum extensively back in the day and he appears to be playing one in this photo as well.

• Finally, if you dig this brief clip of Gadd playing Crazy Army like I did, then I would highly recommend checking out his recent book Gaddiments as well available at Hudson Music. 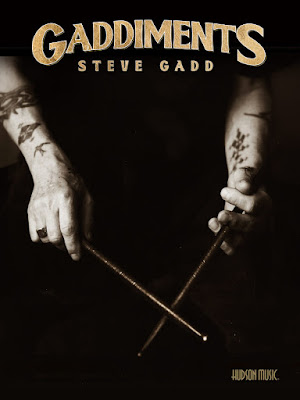