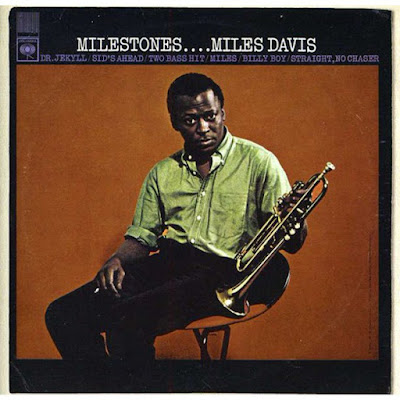 For the second instalment of our ongoing collaborative blog series The Three Bloggers, myself, Ted Warren of Trap'd and Todd Bishop of Cruiseship Drummer decided to offer our collective thoughts on the seminal Miles Davis recording Milestones.

I used to listen to and play-a-long with this album quite a bit back in the day and I transcribed a number of Philly Joe Jones' drum solos so this has been a great opportunity to revisit this music. If you are interested in studying Jones' drumming (and I would highly recommend it at the very least to study and play along with Philly's ride beat!), there is a lot of "trademark" vocabulary worth studying on this album (but don't ask me for my transcriptions...do it yourself. Do the work and you will reap the rewards!) In fact, a long time ago, when I asked Joe LaBarbera about what to listen to for brush vocabulary and trading ideas he simply replied: "Two words...Billy Boy!"

But then he paused for moment and continued: "Well, while you're at it you should probably check out "Two Bass Hit" too!"

And then after another brief pause and some more thought he continued: "Well, just go listen and play-a-long with the whole album!"

Great advice from Joe and now I tell all my students to do the same.

Anyways, and now a few words about listening...

When I was a student at McGill University, my teacher Andre White would often have us do a series of group listening exercises in our improv classes. Basically this would consist of the class listening to a track from an album from start to finish and, as we were listening to it, write down absolutely everything that we noticed. Once it was done we would all share our lists and compare our notes. This would usually lead to some extensive discussion on a variety of points, from many different perspectives. Then we would go back, listen to it again and do the same thing all over again (sometimes several times in fact...each time focusing our ears on a different, specific aspect). This approach to listening with focused intent really opened my ears and taught me not to take listening for granted (and I encourage all my students to consider this as well).

In fact, if you've been following my regular Instagram Live IGTV interview series Four on the Floor *Live*, happening every Tuesday evening at 7pm MST (9pm EST) @fouronthefloorblog, then you may have a noticed a common theme among all the individuals that I've spoken with so far. The fundamental importance of LISTENING comes up again and again and has become a constant theme in every single interview. Anyways, not to digress too much here, but don't forget: learning how to really listen and practicing listening is just as important as playing your instrument!

Okay, so here's a few things I've noticed from revisiting and playing along with the album Milestones over the past few weeks:

- Keep in mind that in listening to this album that it's not a one-off, isolated studio session you are listening to but instead a working band that was playing together all the time, performing on the road for nights on end and had many albums already under their belt (with a few exceptions of course, thinking of Coltrane and Cannonball Adderley interchanging then finally crossing paths on this particular album). Fundamentally I think this is important to acknowledge because the unity that they play with and how the band truly sounds together only comes from a group of people that are used to playing with each other for a concentrated period time. It's pretty rare to find that group simpatico from people who don't play together frequently (although it does happen). For starters, listen to the drum and bass quarter note hook up between Philly Joe Jones and Paul Chambers, the cohesiveness of the rhythm section, the blend and phrasing of the horns and the overall sense of flow. It's remarkable and they are firing on all cylinders here.

- Miles' choice of repertoire is interesting too and the album's overall programming is worthy taking note of. Of the six tracks on this album four of them are blues (yet nothing sounds repetitive or redundant) and one track (the aforementioned "Billy Boy") features the rhythm section while the horns take a break. Also, no ballads! (despite Miles being well-known and celebrated for his compelling approach to playing ballads). Overwhelmingly, the compositions are also written by musicians other than Miles or members of the band (specifically composers such as Thelonious Monk, John Lewis, Dizzy Gillespie and Jackie McLean who all had associations with Davis at one point).

- In my opinion, one aspect of Miles Davis' genius throughout his career was the choice and combination of musicians that he chose to assemble and play with. Every single musician on this album had a unique sound and musical personality. Miles plays very melodic, Cannonball's lines are drenched in the blues and Coltrane is, well, Coltrane (in a brilliant way of course!) I am generalizing/simplifying quite a bit here (!) but it all adds up to a band sound that builds on the strengths and diversity of its players.
- Also, keep in mind that all the artists on this album, at some point, would all lead their own groups in some capacity (perhaps most notably John Coltrane and Cannonball Adderley but even the rhythm section players Garland, Chambers and Jones would all lead their own record dates and/or bands at some point over the course of their careers). I also find it inspiring that an assembly of such strong individual musicians can come together to create a group sound without competing with each other or compromising the group dynamic. They all compliment each other and we can all learn from this.
- I find it's interesting to notice how differently Philly Joe Jones plays and accompanies each soloist. I'd venture to say that his comping is generally at its busiest and most interactive (relatively speaking) when playing behind Coltrane and at its sparsest when accompanying Miles.
- And of course, this album contains many examples of Philly's famous beat, swinging on the ride cymbal with a constant cross stick on beat four on this album. It's easy to take this for granted now but back in the day this simple device was a distinct trademark of Philly's sound. Jones often plays this behind Red Garland's piano solos to contrast the busier left hand comping behind the horns and this beat (with some variations) is central to the title track "Milestones".
No cross stick on beat four = no Milestones (it's part of the tune!)
- One thing that strikes me is the way the rhythm section plays behind the soloists. In general Garland's comping is pretty sparse but it is always well placed, efficient and so deliberate that everything fits and makes sense. The "big" rhythms he plays in tandem with Philly Joe Jones are often like shout sections or backgrounds akin to the type of arranging one might find in a big band. In fact, the rhythm section feature "Billy Boy" is structured and arranged in such a way that it's like listening to a big band arrangement without the big band! ("Two Bass Hit" which was originally played by Dizzy Gillespie's big band still retains that big band "sensibility" and yet never at the expense of the soloists or the looseness of the smaller band dynamic).
And if I'm not mistaken, is it actually Miles playing piano on "Sid's Ahead"?
Anyways, these are just a few general thoughts that come to mind when listening to and thinking about this super swinging recording and I look forward to seeing what Ted and Todd have to say about this important album. In the meantime I'll continue playing along with this one and try to get even deeper into the nuances of this music. It's timeless and there will always be something to learn by listening to it.
As Kenny Washington often says: "You've got to learn the music from the inside out!"
Posted by Jon McCaslin at Monday, March 08, 2021