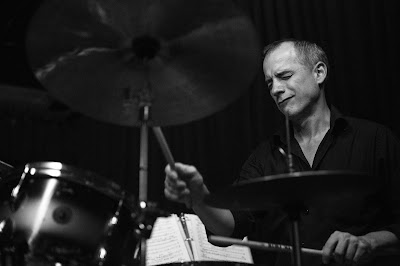 Montreal's Dave Laing is one of Canada's greatest Jazz drummers and has long been a huge influence on my own playing. I studied with Dave during my time at McGill University back in the mid 1990s (he really kicked my ass!) and I also frequently took advantage of the opportunity to hear Dave play on a regular basis for many years around town with a variety of artists (he was always playing everywhere!)

Dave is a consumate musician whose playing mixes sensitive and thoughtful musical accompaniment with fire, a burning ride cymbal beat and a deep sense of swing. I want to be like Dave Laing when I grow up!

Lucky for us, Dave will be performing in Calgary this coming Friday with Montreal's Sam Kirmayer on guitar and Ben Paterson on organ.

Check out this footage of Dave in action with this trio in the studio:

And here's a brief clip of Dave burning through Min Rager's composition "Say What You Mean" from her 2016 studio recording:

Dave was also nice enough to take time out of his busy schedule to answer a few questions:


1) How did you get your start on the drums? Who were your teachers and describe your education.

Some of my earliest memories are of the drums---my Aunt Florence could play a pretty mean rock beat and my older brother Mike was a drummer so that's really how I was introduced to the instrument. Mike was a talented player through high school and college and being 6 years older than me, he was a big influence on my early development. This was the 70's and he was listening to studio players like Steve Gadd and Jeff Pocaro. Incidentally, a lot of records from those days, even the pop recordings, would list all the musicians and it really drew attention to the individual contribution to the players, which the current format of music listening doesn't prioritize.

My dad was a jazz listener and so there was lots of jazz around the house, and back in those days you would still occasionally see jazz performers on tv shows--talk shows and variety shows, and even exclusively jazz programs like the Peter Appleyard show, which would have great bands. I had a chance to see Buddy Rich when I was a teenager and that was mind-blowing! My mom was a country and pop music listener and I remember spending many hours just going through all those records so there was a real mix of things in my early days. I personally gravitated toward funk and R&B bands, as the attraction for me was the feel and the groove--a deeper interest in jazz came a little later for me.

As for formal training, I didn't study until university and there my teachers were Lou Williamson and Pete Magadini. I also listened intently to Andre White and would pick his brain whenever I could so I would put him down as a teacher as well.

2) Who are some of the drummers that have influenced you, and why, over the years?

Every drummer influences me! That sounds a bit trite, but I do take things from every player I see and hear, since everyone has something different and unique about playing the instrument. I had an early encounter with Kenny Washington that was hugely influential in many ways. Of the elite drummers, I'd say I was most influenced by Tony Williams, Elvin Jones, Philly Joe, Jack Dejohnette, and Billy Higgins. I return again and again to their playing and I"m always finding new things. But honestly, there are too many names to list!

3) What are some of the projects and recordings you've been involved with that you are most proud of?

I consider myself a career accompanist and I take great pride when someone chooses me from among the many great players available to help fulfill their project or recording. I've had long associations with a lot of great players in Montreal like Kevin Dean, Ranee Lee, Joe Sullivan, Geoff Lapp, and Remi Bolduc and each of those players has many recordings that I'm quite happy with. I've done many projects with great younger players that I think sound great like Sam Kirmayer, Josh Rager, Carlos Jimenez and others.

4) What are you practicing and working on these days?

I studied a bit recently with a great Cuban percussionist in Montreal named Kiko Osorio and I'm trying to get some of that language together. After seeing players like Antonio Sanchez, Bill Stewart, Eric Harland and others, I'm trying to get some hipper foot ostinatos and odd times together but that's a work in progress!

5) You have been an influential teacher at McGill University now for over 25 years. What is your teaching philosophy and what skills do you focus on with your students?

I usually only have a few students at a time so I try dial in on what each particular player is motivated to work on while also addressing areas where I feel some attention should be focused. I like to come at development from two sides: one is the technical/rational side--which is usually what the books and methods address while the other is the emotional/feeling side of things which is harder to teach but vital to developing something personal and unique. All of our drum heroes were/are technical virtuosos but also developed something unique that made them stand out.

6) What exciting projects do you have coming up?

After this current tour with Sam, I've got a nice gig with Donny Kennedy in October at the Upstairs club in Motnreal with visiting bari sax player Paul Nedzela who's a member of the Lincoln Center Jazz Orchestra and a McGill alum. Following that, I have some shows with Remi Bolduc and also singer Ranee Lee lined up so it will be a busy fall.

7) Tell us about the current tour with Sam Kirmayer and Ben Paterson!

Sam originally put this band together two years ago with a record date and we did some shows last year at this time and we're back at it this year but on a bigger scale. We're doing 15 shows in 19 days, hitting 6 out of 10 provinces, so it's a lot of flying and driving and packing and unpacking but we are having a gas. We do a mix of Sam's originals and some standards and we've had some great crowds so far. I've known Sam for close to 10 years now and it's been great to watch him grow into such a polished performer and composer.

Ben is a fantastic talent and really knowledgeable about the organ tradition so it's fun to play these gigs with a great musician on a rarely-played instrument. 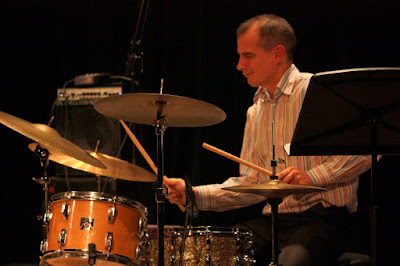 Dave Laing is currently touring Western Canada with the Sam Kirmayer trio featuring Ben Paterson on organ and will be appearing at Lolita's Lounge in Calgary on Friday, September 27th at 7pm.
Posted by Jon McCaslin at Tuesday, September 24, 2019