And....we're back. Thanks for checking in again and I hope you've all had a wonderful end to 2014.

I thought I'd start off 2015 with a little drum exercise I've playing around with lately and found to be very useful. Generally, when I'm on the go and running between gigs I like to pick one simple exercise that's easy to remember, gets my hands going quickly as a warm up and also offers some variations to get my mind running as well.

The following exercise comes from Bob Moses via his wonderful book "Drum Wisdom" which is, sadly, long out of print. In fact, this is really the only technical exercise in his whole book! Since it is out of print, here's the page I'm referring to: 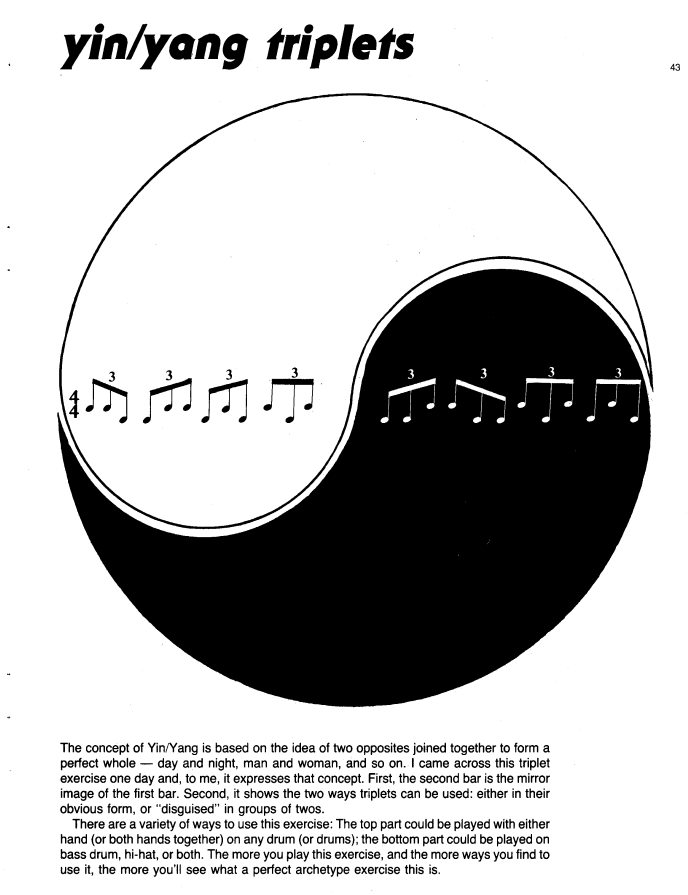 Moses' explanation is pretty self-explanatory however I've come up with a few variations of my own to get some more mileage out of it.

First of all, when I play this one, I reverse the sticking pattern so it looks something like this:

I also put an accent on the first beat of each single triplet pattern (ie. beats one and two of each bar) as this gives the pattern a little more sense of phrasing and forward momentum (accents will do that, ya dig?)

Come up with your own variations.

- Combine adding both singles and doubles to create longer phrases.

- Perhaps go back to the way that Moses intended and start with the double strokes instead of the singles.

- Moses' suggestion of orchestrating these patterns, adding the bass drum and ride cymbal are very useful too.

The great thing about this simple exercise, I think, is that it gets you thinking in triplets while also alternating between single strokes and double strokes. Morello was also big on this (in a different way) during the very brief time that I spent with him in 2007. It also forces you to lead with your Left hand (or "weak" hand) and this is always a good thing.

I showed this exercise to a keen group of drum students at Grant MacEwan University in Edmonton last November and pointed out that the real lesson in this, I think, is to take a simple pattern and see how far you can expand on it. My teacher in Toronto, the great Bob McLaren, used to preach this saying something along the lines of: "Why learn one hundred different patterns when you can learn one pattern one hundred different ways?"

Translation: make the most of what you've got!