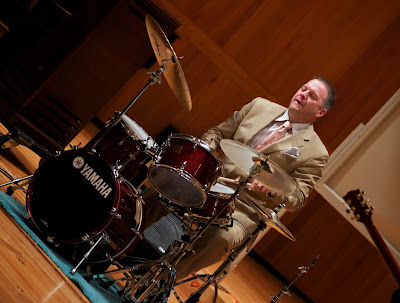 In today's instalment of my occasional column "The Drummer as Composer", I'd like to share a tune I wrote around the year 2002 entitled "Finding Farnsworth". This piece appears on my first album "McCallum's Island".

Around the time I first wrote this piece I had just started checking out the drumming of Joe Farnsworth and was really impressed with his hard-swinging style with such artists as Benny Golson, Mike LeDonne, Eric Alexander, One for All, George Coleman, Harold Mabern, David Hazeltine and many others.

I wanted to write a fast, up-tempo tune as a drum feature with the drumming of Mr. Farnsworth in mind and came up with this one, loosely based on the changes to "Cherokee".

Well, it is essentially the changes of "Cherokee" (!) with my own melodic line written over top however I changed a few chords to adjust for the melody and also you'll notice that the phrasing of the melody itself stretches in the first and second endings of the 'A' sections as well.

The bridge is meant to imply either a half-time swing or Afro-Cuban 12/8 feel with the bass doubling the melody (rather than walking throughout). There are also drum breaks throughout the bridge and the end of the 'A' sections.

It is also meant to be played as fast as humanly possible! 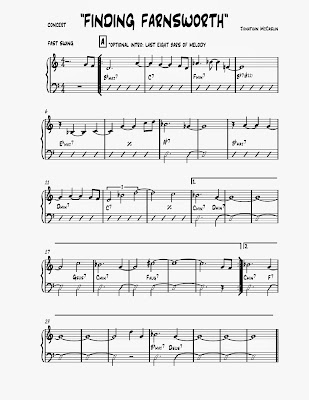 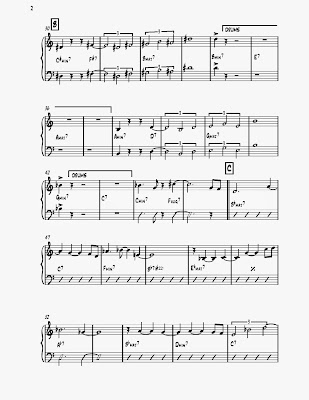 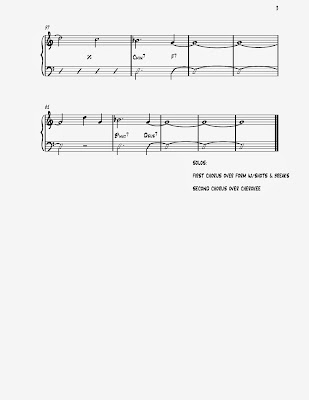 For the blowing on the original recording we played the first chorus of each solo with the changes/phrasing and breaks taken from the melody and then every subsequent chorus using the regular changes from "Cherokee". However, recently I've been envisioning the 'A' sections played as a fast swing and then the bridge modulating to a slower 3/4 waltz feel (all over the regular changes to "Cherokee", ya dig?) If you've heard Christian McBride's recent trio arrangement of the same tune, you'll know what I mean (apparently this was a nod to the Ray Brown Trio version as well!)

If I can figure out a way to embed the recording of this one I will! It's a really fun tune to unleash and stretch on. I'm going to make a point of revisiting this one with my current band in the near future.

If you are interested in checking the original recording of this tune, my album "McCallum's Island" (originally released in 2003) will soon be available on cdbaby.com or my in-the-works-coming-soon website.

Thanks to Jeff Cosgrove who first suggested that I post and share my music here on my blog. Eventually I'll have all my charts from my first two albums (and other unrecorded tunes of mine) available in a sort of compilation "McCaslin Fake Book".

Speaking of Mr. Farnsworth, here's a couple of very short solo pieces featuring his fine brush and mallet work to check out for some inspiration: