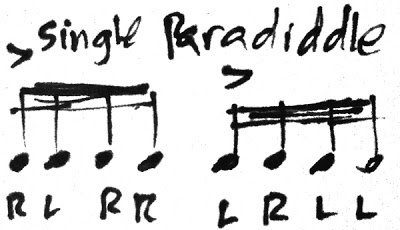 Thank you to everybody who came out to our big band show last Friday evening at Calgary's National Music Centre with the Calgary Creative Arts Ensemble featuring tenor titan Ralph Bowen on saxophone. The band played great and we played to a very enthusiastic, full house. We are already looking forward to our next show on April 20th featuring Brad Turner on trumpet and the music of Kenny Wheeler. Thank you all for your continued support.

Now that I can catch my breath following that epic show (!) here's a few things making the rounds over here at Four on The Floor:

- This has been a great few weeks for Jazz drummers in my hometown of Calgary, Alberta. In the last two weeks I've heard Jesse Cahill with the Cory Weeds/Steve Davis Quintet at Wine-Oh's (formerly known as the Beatniq), Lewis Nash with Christian McBride and the Monterey Jazz All-Stars and, this weekend, local drummers Tyler Hornby and Jon May with Ralph Bowen (also at the National Music Centre). Canadian Jazz drummer Morgan Childs will have his group through town this coming weekend and I'm quite looking forward to that.

Peter Hum over at jazzblog.ca recently caught up with Morgan Childs here:
http://blogs.ottawacitizen.com/2013/01/28/five-questions-for-morgan-childs/

And here's a little preview of what to expect from this group featuring Morgan on drums, Kelly Jefferson on tenor saxophone, Dave Restivo on piano and Jon Maharaj on bass:

- I was searching for something else this morning and came across this brief but cool footage of Dafnis Prieto from a recent clinic performance in Toronto at Long and McQuade:

- From George Colligan over at his blog Jazz Truth, here are some words about the great Jack DeJohnette: http://jazztruth.blogspot.ca/2013/01/and-jack-dejohnette-is.html

- Check out this full-length concert of Bill Stewart with Pat Metheny and Larry Grenadier:

- Playing recently with saxophonist Ralph Bowen was really quite an experience, to say the least! The guy really knows his drums. While I don't have any footage of my own playing with Ralph and the CCAE big band from last Friday, here's a good one of Bowen playing with my fellow Canadian Jazz drumming blogger Ted Warren (on drums) from Toronto's Rex awhile ago on Bowen's catchy minor tune "Soul Proprietor":

Thanks again everybody and have a great week y'all!
Posted by Jon McCaslin at Monday, January 28, 2013