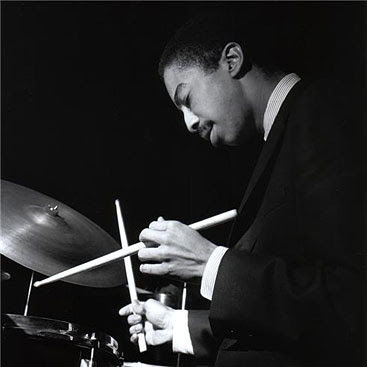 Well, it's been AGES since I've posted any kind of drum lesson but since so many of you have asked so nicely and have apparently found some of the other things I've posted here useful, here's something that I've been working on lately and I've been having some fun with.

After recently re-watching this phenomenal footage of this Tony Williams drum clinic, I was inspired to develop some Swiss Army triplet ideas based on some things that I've heard Tony commonly play around the drums during his solos.

Here is the clinic in its entirety to refresh your memory:

As you can see, Tony would often love to play big PHAT Swiss Army Triplets around his expansive arsenal of toms and floor toms.


This particular variation that I've come up with is a four-note pattern (rather than your usual three-note, triplet pattern) and is based on a hybrid snare drum rudiment that was taught to me by Chris Worthington back around 1995 (Chris was a great snare drummer who marched with the Blue Devils and Velvet Knights drum corps during the early 90s).

So here is the basic pattern:

As you can see it's basically a four-note variation of a Swiss Army Triplet (ie. there is an extra right hand stroke added to the stock rudiment).

Here is the same pattern, but with a reverse sticking and starting with the left hand:

Now, to make use of this on the drum set and to give it that "TW" flavour, add an accent on every fourth eighth-note and double it with the bass drum while that accent moves to the cymbal (or tom, cowbell or whatever you fancy).

As you can probably tell, there is a lot potential inherent in a pattern like this.

I've been trying to work this one into my vocabulary lately and discovered that it's quite a tricky pattern to execute seamlessly (thanks to the right hand "swipe" between the snare and cymbal). In fact, I recall hearing Dave Liebman speak once in a workshop with regards the notion of developing and expanding one's vocabulary. He surmised that if he introduced a new pattern or concept into his playing that it would take roughly a year until that idea worked its way into his playing and no longer sounded forced or contrived. It was comforting to know that I wasn't alone!

So there you go, something more to practice.

Have a great time this weekend and in the meantime here's some classic TW (complete with his yellow drums!) to enjoy: