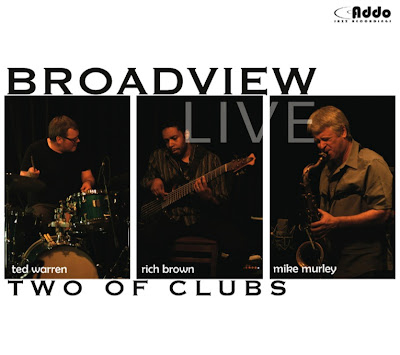 I've known these three musicians and admired their work in different projects over the years but was really excited to hear this collective project come about (and which was recorded live between two different Toronto Jazz venues: The Rex Hotel & Jazz Bar and Chalkers Pub),

Ted grew up in Regina (as did I) but had already moved out East to Toronto via Nova Scotia and Montreal and had long established himself as one of Canada's premier, young creative Jazz voices by the time I met him in the early 90s while he was performing in Regina. In fact, Mike Murley was that gig as well with bassist Jim Vivian in pianist John Stetch's quartet which performed at the Regina Jazz Society. Hard to believe that was almost twenty years ago! I've since heard Ted and Mike play together in a variety of contexts and both never fail to impress.

Ted recently did an interview with The Purple Cabbage, a great Toronto-centric jazz blog. When asked about his new project, Broadview:

"In a nutshell, the initial concept behind Broadview was my desire to get an opportunity to play with Rich and Mike more often. I knew they would sound great in a chordless format and we would have a lot of fun playing together. I generally wrote specifically for the trio. With the chordless trio format, the challenge has been writing and performing music that relies on largely implied harmonies. At any one time, the listener hears the melody note and the bass note, and is required to imagine the notes in between. As a drummer, this is something that I feel I’ve had to work at in a different way, in contrast to the other two [Murley and Brown] who seem to have more of a natural feel for it. That being said, it has been and still is a fun challenge for me, and I’m really enjoying it. The playing, as I expected, has been a great joy from the very first note we played."

Here's some footage of this dynamic trio from a performance recorded earlier this year at the Kingston Public Library:

If only every public library in Canada was hip enough to feature musicians of this caliber in performances such as this. Politicians take note: Now THAT is one good example of how public funding can help support the arts in our communities! Artists of all disciplines need venues and outlets to present their creations AND get paid properly to do it. Using public spaces like libraries and community centres offer ideal opportunities to do this kind of thing. Way to go Kingston.
Posted by Jon McCaslin at Friday, September 30, 2011