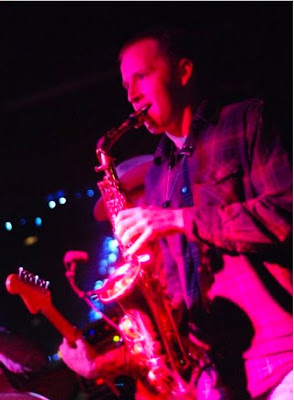 Alto Saxophonist Jeff McGregor is a very talented and dedicated young Jazz artist in the Calgary Jazz community. I've had the pleasure of playing with Jeff quite a bit since my return to Calgary two years ago and he is a constant fixture at many of the city's regular jam sessions including those at the Beatniq and Broken City (more about my take on jam sessions later....) Jeff is also a devout follower of Charlie Parker and I really appreciate his attention and dedication to the bebop language of Jazz improvisation and repertoire in an age where many young people are inclined to ignore that particular portion of Jazz history and important language of improvisation.

Here's Jeff's response to my questions:

1) Can you tell us about your musical background? How did you learn to play Jazz?

Aside from some rather unsuccessful piano lessons in elementary school, my musical training began in Grade 7 when I took up the clarinet and took lessons with my father, who is great clarinet and saxophone player. I became interested in jazz music around that time and played in the school’s jazz band, but it wasn’t until Grade 10 that I started taking jazz lessons. After high school, I went to the University of Calgary and continued taking lessons, but it was a classical program, which left me leading a double life as a bad classical saxophonist by day and a only slightly better jazz saxophonist by night. It was a great experience though and I learned a lot while I was there. After I finished my degree I took a year off to practice and I started the year by spending a few months in Montreal, which was a real wake up call and the catalyst to a whole series of changes that were not so much directly about what I was playing, but rather how I approached music and what it meant for me to be a musician.

2) Who are your musical influences and why?

Charlie Parker and John Coltrane are my two absolute favorite musicians and their music has been my main point of reference since I first began listening to their recordings in high school. Both of them embody everything that I value musically and they are still the centre of my musical universe and probably always will be. Beyond that, Miles Davis’ bands and all the musicians who played on his recordings continue to have an important influence on me. Classical music has also been a significant part of my musical life. Composers like Beethoven, Brahms, Bach, Stravinsky, performers like Glenn Gould, Emmanuel Pahud, Evgeny Kissin, and orchestras like the Berlin Philharmonic have been a major source of inspiration and, above all, enjoyment for me. Even though I think that the process of being a jazz musician and that of a classical musician are fundamentally very different, I still learn a great deal from that whole tradition of composition and performance. All that said, I listen and learn from everything from The Beatles, Bob Dylan, and Radiohead to Mos Def, The Roots, and K'naan. I’ll check out anything that spontaneously catches me, no matter what it is. There are some truly embarrassing songs on my iPod, but I think that if there is something in a piece of a music that I react to, then there is something there worth getting at and thinking about, even if overall it is not the most amazing piece of music or played by the greatest musicians. The fact that a song gains mass popularity means that something is there that people react to and that is worth thinking about, regardless of whatever other limitations the music might have.

3) Name your favorite albums and how they have influenced you.

Charlie Parker’s “The Washington Concerts” is my favorite Parker recording and has some of the most unbelievable saxophone playing and overall music I have ever heard.

Kenny Garrett’s album “Triology” was an early favorite of mine and I still listen to it all the time. He is a master at structuring solos so that they you get a real sense of logical and cohesive development and progression. That and it has Brian Blade, so what more can you ask for?

Miles Davis’ “Milestones” is my all-time favorite album. Everything about it floors me. Miles, Coltrane, and Cannonball play some of the most amazing solos I’ve ever heard, but the real thing about that album that I can never get over is the time feel and the overall sound that the group produces. That album is really unique and I don’t think that there are any other recordings in any of those musician’s discographies that are like it.  In high school, I bought a copy of Milestones, because my school band was playing an arrangement of the title track. Over the years, I have probably listened to that album a few hundred times and I have gone through periods where I was waking up early every day to listen to the whole thing top to bottom. It’s the one!

4) What sort of things are you practicing or developing musically these days?

A lot of the work I’m doing centers on strengthening those fundamental things like sound and time. Everything always seems to come back to those things, so it is really an ongoing and endless project. I’ve been trying to keep one Parker transcription and one Coltrane transcription on the go, so I’ve been spending a lot of time just working on engraining those solos and trying to get it as close to the recording as I can. Easier said than done! Also, I’ve recently started trying to play a bit of drums and I am trying to focus more consistently on developing my piano playing. I’m not sure how deep one can get into rhythm, time, and harmony without some sort of grounding in those instruments. Very much a work in progress!

5) What interesting projects do you have on the go at the moment? (gigs, recordings, etc.)

Right now I’m preparing for a quintet show that is playing mostly my own originals and I am hoping to keep this as an ongoing project, but unfortunately half the band doesn’t live it Calgary, so we’ll see! I would also very much like to start a trio with bass and drums. There have been a number of really excellent trio recordings over the last decade and I would like to try and get into some of those tunes, plus do some writing. In a slightly different vain, I have been working on a sax/drum duo that plays original tunes of mine and is far freer than a lot of the other music I play, which is something that I’m trying to get more comfortable with.

6) Your personal study of the harmonic and melodic language of bebop is both impressive and admirable. Why do you think it is important for students these days to study this technical and stylistic approach to Jazz improvisation?

The reason why bebop is important for students to study if that everything needed to play it is what is required to play any type of Jazz music. I think that younger players sometimes get the impression that bebop is an outdated style and that studying it is more of a tribute to the past rather than a path to playing more contemporary music. I think what this idea misses is that the music of today really still is bebop in many ways. For example, take Chris Potter, Kurt Rosenwinkel, and Brad Mehldau, three of the most cutting edge musicians on the current scene. If you take a look at their improvising, I don’t see many fundamental differences between what they are doing and what Charlie Parker was doing and there is a whole lot that is same. The biggest differences are in the harmonic and rhythmic contexts that these musicians improvise over, but the basic approach to rhythm, harmony, and melody is fundamentally the same. What all this means is that to learn to play modern jazz is to learn to play bebop, because bebop is modern music.

7) Favorite place to eat in Calgary?

Shawarma King on Kensington Road never fails me and they’re open until 4:00 AM and they deliver. Tough to argue with that!

Make sure to catch Jeff's band appearing in a few weeks: