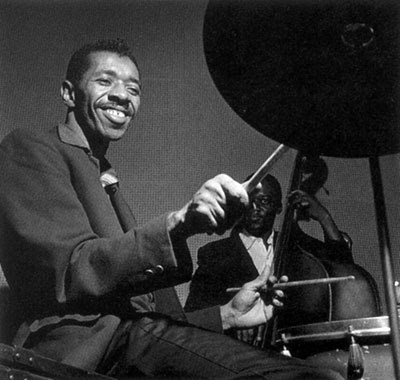 Today's lesson focuses on a pattern that drummer Philly Joe Jones commonly used and how my interpretation of his sticking pattern has evolved over the years.

Jones was a devout student of the snare drum rudiments and regularly incorporated those and other sticking patterns commonly found in the drum texts of Charles Wilcoxin into his solo vocabulary. A common pattern that Jones used over the course of his career involved playing a repeated nine beat phrase of eighth note triplets. Listen to any record he did with Miles Davis and you're bound to hear it (among other albums of course...).

So anyways, when I first started to transcribe Jones' drumming I notated this nine beat pattern like this:

He would commonly play this pattern several times in a row as an over-the-barline type of phrase in 4/4, several times in succession. You'll also notice that the pattern alternates the accents between the right and left hands. However, after showing my transcriptions to my teacher at the time, Chris McCann, he informed me that Philly very rarely played single strokes and was more inclined to use some sort of combination of double strokes. Chris knew this first-hand as he was friends with Jones and at one time followed him around from gig-to-gig, studying him up close.

So taking that into account I started to use this following pattern that uses a combination of double strokes and singles rather than just singles:

This variation also leads with the right hand (rather than shifting the accents between the right and left hands) and I've got a lot of mileage out of this pattern over the years. However, fast forward about fifteen years, and after some time hanging out with John Riley and hearing him talk about Philly Joe Jones' drumming and sticking patterns, I apparently had it all wrong !

According to John this famous Philly nine stroke pattern looks something like this:

Very logical and that's the genius of it !!!

Of course any of those three patterns work and I try to use all three in my own drumming. The more ways you have to execute a given pattern, the better - I think. And it will only help you unlock and develop further interesting patterns around the drum set.

Here's a repost of the great Philly Joe Jones in action, here performing with Thelonious Monk. Dig his use of double strokes throughout: