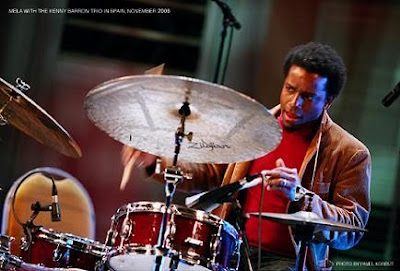 Francisco Mela is another Cuban-born jazz drummer that I've been obsessed with lately. After leaving Cuba, he apparently spent some time in Toronto and Boston before establishing himself in New York. I quite enjoy his style and approach and I would describe him as somewhat of a Cuban version of Brian Blade (!) He plays frequently with Joe Lovano's two-drummer band US FIVE (with the other drummer being Otis Brown III) and Kenny Barron as well as his own groups.

I find his aggressive style to be engaging, however I've always been intrigued with his straight-ahead jazz approach and, for a born and raised Cuban guy, the not-so-obvious Cuban influence in his playing. Although, I'm SURE that it's in there ! This isn't a comment on his musicianship or anything - it's just I notice that his Cuban roots aren't quite as obvious in his playing as compared to other Cuban-born jazz drummers such as Ignacio Berroa and Dafnis Prieto. The guy REALLY swings !!!

And I really dig this (!) and think he's really quite the drummer. Just more proof that Jazz music really is a "Global" music....

*I should back track here....some of his original music clearly demonstrates a Cuban folkloric influence and this is very cool, but I think Mela is also a drummer very well steeped in the modern jazz language*

Here's a clip of Mela in action last summer at my old jazz haunt in Toronto, the Rex Jazz & Blues Bar:

Boy, I really miss those Rex hamburger's...they don't go easy on the garlic!

And below, another clip of Mela performing in South America (?):

Courtesy of Drummer's World (a great drum shop located in Manhattan), Mela talks a bit about his approach and philosophy in regards to ride cymbal playing:

Here Francisco is featured with his own group at the New York jazz club Small's. Fransisco Mela, like Dafnis Prieto, is also an accomplished composer and has a couple of acclaimed albums to his credit. In this footage you can dig Mela doing his thing on the nice house Canopus bebop kit:

And here's some footage of Mela playing with another frequent employer of his, pianist Kenny Barron: