Last night took me to the Banff Centre for the Arts where I attended a concert featuring Wynton Marsalis and the Jazz at Lincoln Center Orchestra. Having heard them in both Montreal and Toronto, this is the third time I've seen this group and it was definitely the best performance I've seen of them yet.

Performing to a capacity crowd, the orchestra played pieces drawn mostly from the classic "Blue Note" era (i.e. pieces by Jackie McLean, Joe Henderson, Thelonius Monk, Lou Donaldson) with all the arrangements penned by members of the orchestra itself.

Last year in Toronto I was a little disappointed with the arranging in that the focus was heavily more focused on the soloists rather than the ensemble. However, last night the balance seemed more even and featured not only great soloists but tight ensemble playing and more extensive writing.

A few notable things that stood out:

- James Zollar, whom I remembered from my days in New York following around the Matt Wilson "Educational" Quartet, was astounding on his muted trumpet feature on Duke Ellington's "Portrait of Mahalia Jackson" (from Ellingtons "New Orleans Suite")

- The rhythm section was rock solid and of course drummer Ali Jackson Jr. - you are my hero !

I should also take this opportunity to say what a delight it was to hear the band so perfectly sound-wise. The sound engineers did a fantastic job of managing the sound. In my experience this is very rare. Most of the time, sound engineers don't have a clue what they are doing when it comes to jazz music. But the crew at the Banff Centre did an excellent job of amplifying what was needed without the need to over amplify anything or replace the acoustics of the band with unneeded micing. 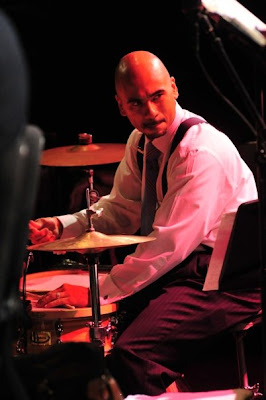