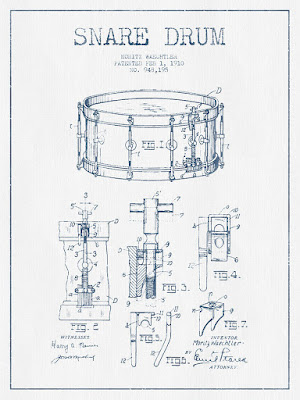 Over the course of our current circumstances, dictated by the COVID-19 pandemic, I've been inspired by several great drummers who took it upon themselves to share their knowledge and passion for drumming via social media on a regular on-going basis.

In particular, these are some of the great drummers that have inspired me over the past few months and I've learned a great deal from their regular Facebook/Instagram posts and videos:

- For a couple of months Calgary's Gavin Sorochan offered a daily demonstration of Alan Dawson's Rudimental Ritual via Facebook; one rudiment, one day at a time. As well, he gave very informative and concise daily explanations, demonstrating rhythmic applications of Gary Chaffee's compound sticking concepts. I'm not familiar Chaffee's method so this continues to be very eye opening for me. Gavin's posts also encouraged me to invest some time on my own drum pad and revisit the Rudimental Ritual.

- Eric Binder (whose wonderful publications are no stranger to the readers of Four on the Floor) is continuously sharing great clips of him playing his vast collection of vintage drums & cymbals. His newest book 3/4 Rudimental Rundown and frequent demonstrations of Charles Wilcoxon snare drum solos are inspiring and motivating to say the least (I'm also always really impressed with how quietly Eric can play this stuff!)

- Jason Brown has been consistently sharing a vast wealth of snare drum and rudimental knowledge, offering very clever and rhythmically challenging variations on standard rudiments and sticking/accent patterns on a daily basis via Instagram. Jason was also offering a weekly masterclass drum hang with Charles Goold and I found these be really great as well. Tune in with Jason and you'll learn something!

- Greg Hutchinson's daily Instagram practice pad sessions have been really informative, always motivating and I really admire his right hand finger technique! Greg pulls no punches in terms of what you need to do to get better.

Every time I tune in to watch these guys, I learn something!

Anyways, all this discussion about the snare drum and the rudiments has not only had me practicing more lately but it also got me thinking about some bigger musical considerations as well.

I've been playing rudiments for nearly 35 years now (!) and while I think they are very important for a drum set player, I also think it's easy to take them for granted and lose sight of their purpose if we're not careful.

So here's a fews things I've been thinking about lately with regards to practicing rudiments:

1) IT'S NOT ALL ABOUT PLAYING FAST

Fortunately, as I matured as a musician and started to study the greats, I quickly realized otherwise and wisened up (!) However, I still feel it's important to remind ourselves, from time to time anyways (and for our student's sake as well!) that rudiments are merely tools for making music.

I recently watched a wonderful Peter Erskine live masterclass via Facebook and when he demonstrated his basic warmup routine he said a couple of things that really resonated:

"When I warm up, I play slow, I play quiet...and I play relaxed"

What I took away from this was that the mastery of the rudimental language of drumming isn't all about speed or how fast one can play. Rather it's all about control at all tempos (including slow ones!), at all dynamic levels and being able to play with a consistent, relaxed and pleasing tone on the instrument. It's all about sound.

Many drummers have great hands but can't swing or groove worth a dime! (or whatever musical currency you happen to subscribe to...) You'll have much better success applying the rudiments to the drum set if you get used to playing them in time.

I was first introduced to this concept a very long time ago by Ted Warren when I came across a hand written lesson of his entitled Groovin' The Rudiments.

Play your rudiments with a metronome at a variety of tempos (not just the fast ones either!) and get used to phrasing them in 4 or 8 measure phrases.

Jason Marsalis once told me that he liked to practice his rudiments along with music (such as Louis Armstrong, Charlie Parker or Bud Powell) and that he would try to match his eighth-note articulation to the music he was playing along with. Personally I love playing rudiments on a pad along with recordings of Bernard Purdie playing drums.

You've got to figure out how to make these patterns dance.

Musical drumming is always the goal. As with tempos, practice your rudiments at all dynamic levels.

Learning to distinguish and properly play accented patterns is really important too.

There is nothing worse than hearing a drummer recite a steady stream of unimaginative, prescripted rudimental patterns when it comes time for them to solo.

Listening to Philly Joe Jones or Kenny Washington (among many others!) will quickly inform your melodic approach while using a rudimental vocabulary.

Learn some melodies (Thelonious Monk, Charlie Parker, etc.) and play them on a drum pad using a variety of sticking patterns and rudiments to embellish the melodic rhythms.

Use your imagination and see how many ways you can orchestrate a melody using different rudiments.

Always think about the phrasing and the sound.

I once attended a masterclass with Ed Shaughnessy many years ago where the audience was primarily made up of young drummers who played in high school marching band drumlines.

Ed began his masterclass by holding up a hand written poster that exclaimed "If you aren't using your feet, then you aren't playing the drum set!"

It seems pretty self-explanatory (!) but I think the point he was trying to make was that while having great hands and working out on a drum pad are both great, as drum set players we cannot neglect our feet.

Practice playing your rudiments on the snare drum while using any number of foot ositnatos (they don't even have to be complicated...) and get your hands and feet playing together (this is the basis of Alan Dawson's Rudimental Ritual btw).

Take things a step further and explore different ways you can split up and orchestrate the rudiments between the hands and the feet. Be creative and use your imagination. Think of the drum set as one instrument.

Play all your rudiments with your brushes and you won't regret it.

Apparently Terri Lyne Carrington warms up every day by playing through Alan Dawson's Rudimental Ritual first with sticks, then brushes and finally with a pair of mallets on the floor tom.

The brushes are different beast physically than sticks and playing rudiments are a great way to develop your brush technique.

Here's a quick summary of some ideas to think about when practicing rudiments:

- Play your rudiments at a variety of different tempos. Don't get hung up on speed for speed's sake.

- Stay relaxed and pay attention to the quality of sound you are making (even if you are playing on a drum pad!)

- Play any accented patterns with distinction and clarity

- Play your rudiments at a variety of dynamic levels

- Play along with recordings

- Make the patterns feel like something. Make it swing!

- Play the rudiments on the snare drum while playing basic feet ostinatos. Get your hands and feet to work together!

- Play the rudiments with brushes (and mallets!)

- Progressive Steps to Syncopation for the Modern Drummer (Ted Reed) *Use many of Alan Dawson's variations!*


Okay, hopefully this has all been helpful and has offered you at least a few things to think about while practicing your rudiments. Hopefully you'll approach them with a musical sensibility in mind.

And to wrap things up, here's a couple of great clips featuring Ted Warren and Jason Marsalis improvising with just a snare drum. These illustrate pretty much everything I've talked about today, in one way or another:

And this one is a repost, but a personal favourite of mine. Here is Dame Evelyn Glennie playing a press roll for 30 minutes straight, exhausting the musical possibilities of one single rudiment!