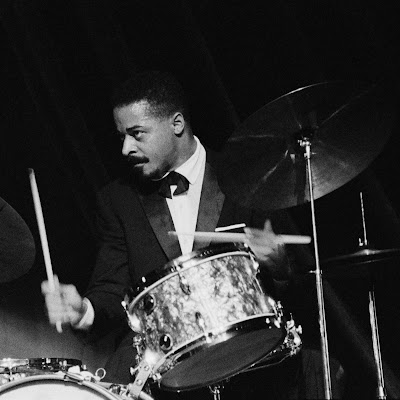 The great Jimmy Cobb recently passed away at the age of 91. Jimmy has always been one of my favourites and, in fact, was one of the first jazz drummers I was ever exposed to. He's always been a huge influence on my own drumming.

When I was about 15 years old my jazz band director at the Regina Lions Band, Brenda McAlpine, made a mix tape for me (remember those mystical sonic devices we used to call "tapes" or "cassette tapes"?) with three albums on it: Kenny Clarke Meets the Detroit Jazzmen, McCoy Tyner's Just Feelin' and Art Pepper's Gettin' Together. The drummers on those records (who I still listen to and study today!) were Clarke, Louis Hayes and...Jimmy Cobb.

Not long after that introduction came listening to his work with Miles Davis on Kind of Blue and In Person at the Blackhawk. However, one real attention grabber for me was when drummer Kevin Dempsey played me Joe Henderson's Four! recorded live with Jimmy Cobb, Wynton Kelly and Paul Chambers. Cobb's solo on the title track still floors me today (Go check that one out!)

I was also fortunate to finally hear Jimmy Cobb play in person at the Calgary Jazz Festival in 2009 with his Kind of Blue tribute band. I managed to sneak backstage afterwards and had him sign my favourite old 19" A Zildjian cymbal ("Don't sell it on eBay!" he said to me afterwards...) 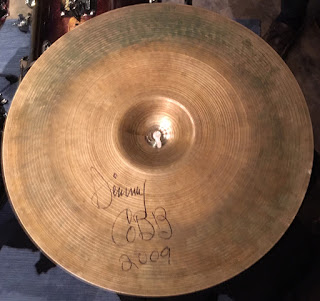 Pat was nice enough to take some time to share what it was like to play with Cobb:

"Some Thoughts On Jimmy Cobb" by Pat Collins

In January 2003, my friend Mark Eisenman asked me to play with him on a recording with legendary drummer, Jimmy Cobb. This recording is now available on the Cornerstone Records label, under Mark’s name, and is entitled, “Sweet and Lovely”. A few things stand out about the session that I am happy to have the opportunity to share.

The first thing that comes to mind when thinking about that session was the fact that the first couple of takes, from my perspective, didn’t feel as good as I thought they would have. I was playing tentatively and took the approach of trying to “follow” Jimmy. After a while, Barry Elmes, who was acting as producer of the session, told me to just play like I play and from that point on, things felt fantastic! It was a real lesson for me, that no matter who you’re playing with, you can’t be a follower, rhythmically. Once I committed to playing with a bit more conviction, things lined up with Jimmy and it and felt great! It was a truly memorable session.

One of the tunes we recorded for the album was, “Someday My Prince Will Come”. Mark decided we play a similar arrangement to what Miles did on his album of the same name. The intro starts with Paul Chambers and Jimmy Cobb playing a quarter note pedal on an “F”, with Wynton Kelly sneaking in after a few four bars or so. When Mark and I were playing this arrangement with Jimmy, at one point we looked at each other and each of us had this goofy smile on our face, the look of astonishment that here we are, playing with Jimmy freaking Cobb!

One of the things that most impressed me about Jimmy during the session, was how seriously he took things. It would have been very easy for him to come to the session, collect his cheque and get out of there with there as quickly as possible. At the point in the session when it felt like things were winding down, Jimmy said to us, “If you guys want to do some more, I’m up for it”. I’ll never forget that, and whenever I’m tired on a session or gig, I draw on those words from Jimmy as inspiration as well as a kick in the pants to myself.

Jimmy’s commitment to the music was also exhibited with us a year later. The trio did a six-night gig at Toronto’s, “Top O’ The Senator” club. It was such an incredible experience to be part of this gig. Every night people would come in with their vinyl copies of the iconic albums Jimmy played on and ask him to sign them. He was always gracious and often took time to have conversations with the people requesting the autograph. For the last tune of each night, Mark would call, “I’ll Remember April”. Mark would let Jimmy set the tempo each night, and it seemed like each night Jimmy would start the tune a little bit faster. Mark and I got used to buckling our seatbelts for this and by the end of the week, the tempo was burning!

It was such an honour, education and thrill to have the opportunity to play with Jimmy Cobb and something that I will never forget. RIP Jimmy. 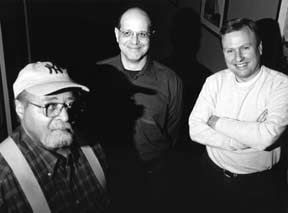 Joe Farnsworth has also recently produced yet another amazing YouTube video, this time offering his tribute to Jimmy Cobb, featuring an all-star cast of drummers and well-wishers: