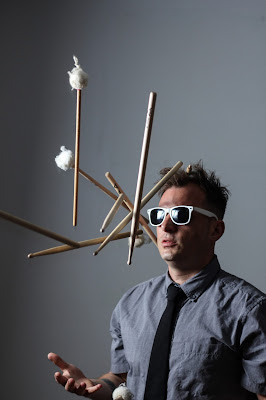 German-born, New York based Jazz drummer Jochen Rueckert has recently produced and released a series of wonderful Jazz drumming instructional videos, all drawn from his extensive personal experience. These are really well done and I highly recommend these to anyone seeking to up their game as a Jazz drummer. Check out the new link and banner on my blog, located on the right hand side of the page. You can also visit his site here: https://www.jochenrueckert.net/#instructional-videos

Jochen has been active on the New York Jazz scene for over 20 years and has been played with a who's who of contemporary Jazz artists. Check out this clip of him with his quartet featuring Mark Turner:

Jochen was also kind enough to take some time out of his busy schedule to answer a few questions about his latest instructional project:

-Tell us all about your new series of instructional videos. What is it all about?

I started releasing short instructional videos through my website late last year. So far I've released 6 episodes, each episode is around 20 minutes long and focuses on one topic. I've got one episode only focusing on brushes, for example. So, say you're not interested in my advice on brushes then you can skip that one. I tried to pack as much useful information into each episode as possible

-Why did you decide to pursue this project?

Well, I have been teaching increasingly over the last few years, probably because I am more visible now as a band leader. Frankly, I got tired of telling people the same shit over and over in private lessons . There seem to be so many common problems amongst my students, I thought It would be good to streamline the whole process into a video series and save a lot of people the arduous trip on the C train to my house. I also feel like a lot of the other jazz drum masterclass videos out there are all over the place, many are not very focused, with too much playing or showing off by the artist, and some, I feel, are way too advanced, some miss the point entirely or pass along very little useful advice. So I was hoping to improve those aspects with starting my own series. I am also continuously broke, as required by jazz-law, so i would be lying if I said making a little extra bread wasn't an incentive.

-What were the logistics involved in completing such a project?

Writing the material was easy - I really had to stop myself actually, so many things that come up in lessons that I wanted to get on tape. Much harder was finding the right format and dividing the material into episodes that make sense, since a lot of things are connected. Presenting that stuff on camera without an actual script or cue cards or a telepromter was a real bitch, though. You can see me being veeeeeery uncomfortable in the first episode and slowly getting adjusted throughout the series. Mostly you're watching exhaustion taking over my body once you get to episode 5. Originally, I was considering doing it for some of the platforms already out there: mymusicmasterclass, Jazz Heaven, and the soon to be launched elite music mentor- they're all cool but somehow it didn't quite work out timing-wise. Turns out my neighbour is a pro cameraman so we just went for it and we filmed all the stuff in my practice room here in my apartment in Harlem over two days. My buddy Matt Marantz did the drum recording with his mobile setup and it was pretty intense actually, with all the lights, cameras and mics in that small room. And the editing also really sucks, apart from it taking ages, it's also quite painful to watch oneself on screen over and over.

-What can you tell us about your background as a musician?

Just a quick overview- I am a jazz drummer mostly, I have been doing a lot of sideman work in a plethora of bands - notably the Kurt Rosenwinkel quartet, Melissa Aldana trio. Recently I play a lot with my own quartet, with Mark Turner and either Lage Lund or Mike Moreno and whatever bass monkey is available. I play a lot of "modern jazz" ( almost a curse word these days) and I love playing (and also writing) more traditional stuff, with a little modern twist perhaps. I am a little old fashioned that way in that I love jazz from the 60s. Apart from that, I make a lot of pretty far out electronic music under the moniker "Wolff Parkinson White" and here it's more about metric modulation from 17/16 to 25/8 every 2 bars and microtonal tone rows at 208.5 bpm.

-How did your musical background and experience shape and inform your ideas about developing this series of videos?

Well, as I mentioned, I am just a tad more old fashioned than some people think. I believe there should be a strong understanding of the history of jazz and that your playing should be rooted in that tradition. I get a lot of students that are clueless about that sort of stuff and can't swing their way out of a paper bag. I mean, they want to, but they can't. Then they just go on and study some more advanced stuff like weird odd meter things or metric modulation whatever. I am trying to bring some perspective to that: "first things first". You can't really do all that fancy stuff that people often seek me out for, before you have a solid base to build it on .

-What have been some of the highlights and challenges while working on this project?

As I mentioned before, editing is really frustrating and an absolute nightmare was getting subtitles made. I was hoping for some customers in Japan and China so I spent a lot of time explaining everything to various translators, then in the end there was basically no interest from Asia whatsoever, which was a bummer, so I stopped making asian subtitles. On the positive side, it was nice to not only get some positive feedback from drummer colleagues, but also from some people that play other instruments too.

-What does the future have in store for you and your activities?

Well, I am about to hit the road for 3 weeks with my quartet, I am doing a little bit of big band work for the NDR big band, which is unusual for me, I am working on some new music for my jazz quartet and for a project with a larger, extended horn section band as well as slowly finishing up the next Wolff Parkinson White record I have been slaving away at for several years. This one will have different guest singers, so that'll be fun.